Nonfiction November: Be the Expert...Louisa May Alcott 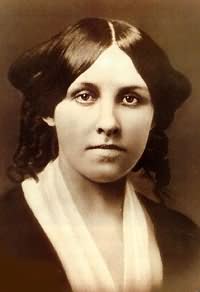 For week 3 of Nonfiction November, the focus is Be The Expert/ Ask the Expert/ Become the Expert and is hosted by Veronica at The Thousand Book Project.

First of all, I can in no way, shape, or form claim to be an expert on Louisa May Alcott. I never read Little Women until only a few years ago, and she is not even in my top 10 favorite authors. But, I find her life absolutely fascinating and I appreciate how she lived her life, her values, and her determination to succeed.

A couple of years ago, I read just about everything I could get my hands on about LMA and can recommend the following books - I've linked to the blog posts about each book and provided excerpts from those posts to spare you from actually plowing through them looking for nuggets.

Louisa May Alcott: The Woman Behind Little Women, by Harriet Reisen

I came away from this bio with a renewed admiration for LMA--her courage, her wit, her fortitude, and her talent.  She struggled with identity, but in the end, was able to accomplish what she set out for herself.  Truly a remarkable person.

Marmee and Louisa, by Eve LaPlante

I really enjoyed the book and felt that LaPlante did a superb job in defending her premise that the relationship between LMA and her mother, Abigail May Alcott, was the most important in her life and was fundamental to her success as a writer. I also thought LaPlante did a good job of putting their lives into historical context, and I learned a lot of social history about the nineteenth century.

Eden's Outcasts: The Story of Louisa May Alcott and Her Father, by John Matteson

Coming into the book, I knew enough about A. Bronson Alcott to know that I thought he was a selfish crackpot who endangered his family's health and well-being to pursue his experiments in communal living. However, I had no idea what an innocent, well-meaning selfish crackpot he was until I read this book. Like his daughter, Louisa, I ended up forgiving him because his heart was so clearly in the right place, even if his ideas and capabilities fell fall short of the mark.

LMA only served as a nurse for three weeks, but this brief service changed her life profoundly.  Of this time, she said that she was rarely ill before it and never truly well afterwards. She had contracted typhus at the hospital and was treated with a compound containing mercury, which wreaked havoc on her body and most probably shortened her life.  On the other hand, her time as a nurse on her own in a city far from her Concord home during the war broadened her vision and deepened her perspective.

Little Women, by Louisa May Alcott

Now that I've finally read Little Women, I was able to read the Little Women chapter in Erin Blakemore's The Heroine's Bookshelf, which explores the trait of ambition and the character Jo. I found Louisa May Alcott's story so sad as compared to the magical world she created in Little Women, but then that is par for the course when it comes to fictional worlds created by beloved authors.

It didn't occur to me to want to read John Bunyan's The Pilgrim's Progress until last year when I finally read Little Women. The March sisters play-act Christian's pilgrimage from the City of Destruction to the Celestial City, and they attempt to shoulder the burdens life deals them with Christian as their model. Only whilst reading Little Women did I fully realize what an impact The Pilgrim's Progress has had on western literature.

I first read Pickwick Papers roughly 40 years before I read Little Women and have read it several times since then so when the March sisters play Pickwick I actually knew what they were doing and thought it great fun. Reading what LMA clearly loved is another way to understand what made her tick.

March is a novel in which the main character is Mr. March, the father of Meg, Jo, Amy, and Beth March and husband of Marmee, literature's archetypal mother, in Louisa May Alcott's Little Women.

I really think I would've enjoyed March much more if Brooks hadn't leveraged Little Women.  Her main character still could've hailed from Concord, MA, still could've rubbed shoulders with Emerson, Thoreau, and Hawthorne, still could've been an abolotionist, but needn't have been saddled to Marmee and the girls from Little Women.  There's just too much baggage and it weighs the story down with doubt and assumptions and inevitable dissappointment.

The Other Alcott, by Elise Hooper

For some reason I didn't blog about this novel about Mae Alcott, Louisa's youngest sister and the model for Amy in Little Women. I actually really liked it and want to reread it soon. I am one of the few people who actually like and sympathize with Amy and reading about Mae just intensified the belief that LMA really threw her sister under the bus with her Amy. It turns out that Mae was a very talented artist who died young and LMA raised her daughter. I loved reading about the art world in Paris in the latter part of the 19th century.

Blog post on how the mother/daughters are the heart and soul of this family and how every character is actually part of the family.

Travelogue which includes a visit to the Alcott home, Orchard House, in Concord, MA as well as the cemetary where LMA is buried.