Louisa May Alcott: The Woman Behind Little Women 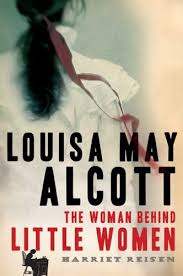 In May, I read Harriet Reisen's excellent biography of Louisa May Alcott, Louisa May Alcott: The Woman Behind Little Women, and have to say that of the three bios I have read of LMA, I think I enjoyed this one the most.

I began, knowing the story of LMA's life, feeling that old frustration with her father, A. Bronson Alcott.  In the other bios, Eden's Outcasts by John Matteson and Marmee and Louisa: The Untold Story of Louisa May Alcott and Her Mother by Eve LaPlante, Bronson is really portrayed unsympathetically as someone who simply would not rise up to his familial responsibilities and work to support his family regardless of his personal aspirations to be a thinking man.

Reisen, early in the book, suggests that Bronson suffered from a mental illness that prevented him from acting differently than he did.  I still found him frustrating and gritted my teeth when he scolded LMA for her shortcomings (in his eyes), but I found myself understanding him better and especially understanding better LMA's forgiveness and tenderness towards him as their lives drew to a close  For that alone, I am glad I read this book.

The other thing this bio gave me that the others did not was an appreciation for her other works (i.e., other than Little Women) and a desire to read some of her potboilers.  In fact, I just received a copy of Behind a Mask: The Unknown Thrillers of Louisa May Alcott, which is an anthology of some of the better sensationalist stories she published.  I've been mulling over what to read for the Back to the Classic challenge in the category of Forgotten Classic, and I think this should fit the bill nicely.

It makes sense that this bio would inspire me to read more of LMA's works as it does set out to tell the story of how Louey. as her mother called her, became a successful and renowned and beloved author.   I enjoyed reading the notes that LMA as an adult wrote in the margins of her own letters and journals and stories from her youth.  We are so lucky that even though she burnt a good deal of her personal writing, she kept much for posterity to study and enjoy.

I came away from this bio with a renewed admiration for LMA--her courage, her wit, her fortitude, and her talent.  She struggled with identity, but in the end, was able to accomplish what she set out for herself.  Truly a remarkable person.

Now I'm eager to watch the documentary, with the same name, that Reisen helped produce and wrote.  It features Jane Alexander as LMA.  Here she is during one of her runs, in which she tries to use up some excess energy. 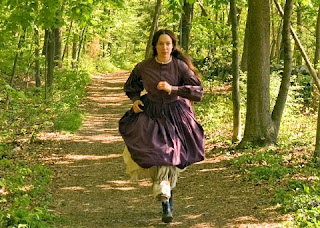 Email ThisBlogThis!Share to TwitterShare to FacebookShare to Pinterest
Labels: Harriet Reisen, Louisa May Alcott, The Woman Behind Little Women