Adam Bede: now that's the way to do an adaptation! 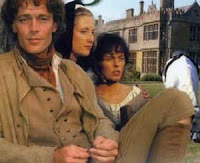 I watched the 1991 BBC adaptation of George Eliot's Adam Bede last night and was blown away by how good it was. It only took 1 hour and 45 minutes to tell the story of Adam, Hetty, Dinah and Arthur, but I was thrilled that the story was told precisely as Eliot formulated it.

The screenwriter, Maggie Wadey, resisted the urge to invent new motivations for the characters, and I cannot think of a single plot point that wasn't included. Masterfully done. Coming off my recent disappointment with The Woman in White, where wholesale changes were deemed necessary, I was giddy with relief, hence my lavish praise. IMDB lists Wadey's other screenwriting credits and I shouldn't have been surprised at the quality of the writing--she was also responsible for Wharton's The Buccaneers, which I have simply got to find time to read and then rewatch, and my absolute favorite dark horse, Precious Bane, which is not available in any form as far as I can tell. She was also responsible for the latest BBC attempt at Mansfield Park. I hated Billie Piper so much in the role that I can't even recall whether the script was decent or not.

Back to Adam Bede, my only nitpick was that Iain Glen looked too much like Richard Chamberlain when he was in The Thornbirds, but I thought he did a fine job of capturing the interesting combination of arrogance and naivete that is Adam. Patsy Kensit was excellent as sulky, sultry Hetty Sorrel, and Susannah Harker was terrific as Dinah. James Wilby did a good job portraying the weak but well-intentioned Arthur Donnithorne. Visually the movie was a pleasure, staying true to Eliot's pastoral vision as well as showing a realistic view of farm life surrounding country gentry, and the gulf between the classes.

The only real deviation from Eliot's novel was that the movie started with the trial/conviction of Hetty, and then most of the movie was a flashback. This was fine with me, especially since I already knew the story and it cast a pall of doom over frivolous Hetty from the outset, which is really what Eliot also did in her novel.

If only all adaptations could be this true and this good.
at Wednesday, December 01, 2010