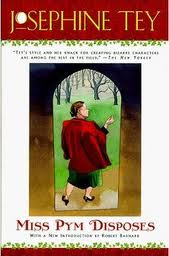 Rarely has a mystery story made me think this much. I finished Josephine Tey's Miss Pym Disposes last weekend and just haven't been able to distill what I think about it enough to write about it. Hopefully, the act of pressing keys on my keyboard will make my thoughts gel somewhat.

Miss Pym Disposes, written in 1946, was the third mystery by Josephine Tey, aka Elizabeth Mackintosh (1896–1952). Set in a girl's physical training college (i.e., the young women are learning to be PE teachers) in England, it reminded me a bit of Dorothy Sayers' Gaudy Night in that a visitor to a female academic institution is struck by the not-rightness of the place and in the course of the novel uncovers what ambition, disappointed hopes, and talent and lack of it can wrought when left to run amok.

The basic storyline is that Miss Lucy Pym, a middle-aged woman, has recently found success and celebrity by writing a best-selling book on psychology, and has been invited by the principal of Leys Physical Training College to give a lecture to the students. The principal is an old friend, and Lucy is easily persuaded to stay on for a few weeks to witness the final examination demonstration, which consists of gymnastics and dancing, and the graduation exercises. It turns out that the girls upon graduation are placed in jobs, and the plot turns on the fact that a plumb job is handed out to a girl who no one, except the principal, feels is worthy of it.

I really enjoyed how Tey explored various ethical and moral issues here. The school is not a democracy--at best, it is a benevolent dictatorship, and the students and staff must bow to the autocratic whim of the principal even when they know she is being tacitly unfair and unjust. Lucy in the course of the story uncovers a "crime" that she decides to ignore and then learns too late that her inaction may have prevented a more heinous crime from being committed. When she discovers who committed the more heinous crime, she again plays God and decides that more lives will be destroyed as "justice is served" and it would be better to simply walk away and let the guilty go free.

Most mysteries end with the detective, amatuer or otherwise, handing over the culprit to the authorities so that the process of justice can attempt to right the wrong. Sometimes this is done reluctantly when the perpetrator is likeable or there a mitigating circumstances, but I can't think of another instance when the detective simply looks the other way. Miss Pym Disposes is really a different sort of mystery in that Lucy arbitrates justice outside of the societal processes--like the principal who handed out the jobs, Lucy Pym takes on a godlike function when she turns detective, and this is troubling, intriguing but troubling...which is a good thing!

I can't argue that Lucy was right in her analysis of the situation and I was relieved that more lives weren't destroyed so that justice could be served, but not believing in the Judicial System is a mighty big leap to take. One might argue that Miss Pym Disposes , despite its quiet, quaint, bucolic tone, is an awfully subversive book!

I was intrigued by this book--sucked in by the elegant writing and charming turn of phrase that I've come to admire in Tey's books--sucker punched by the ending--and eager to read more by Tey.

For most of the book, I kept on turning over in my mind the phrase from Thomas à Kempis's Imitation of Christ, "...man proposes, but God disposes." I take this to mean that God determines outcomes. I assume Tey had this quotation in mind as in this story, the detective, Lucy Pym, metes out justice, plays God, supercedes the judicial system.
at Wednesday, November 24, 2010