Posted by JaneGS
I read Little Women in February, counting it for the Back to the Classics challenge category of Family. So let's talk about the March family. 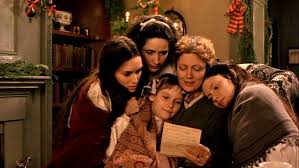 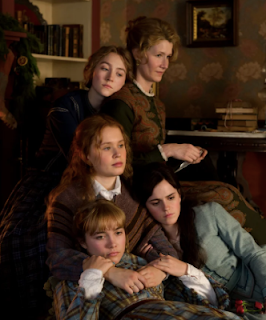 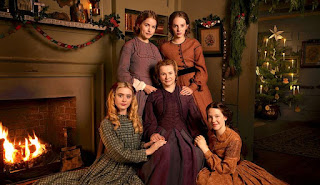 Jo, Amy, Beth, Meg, and beloved Marmee are the heart of Little Women. But, when you think about it, the entire cast becomes part of the family.

Of course, there is the mostly absent Mr. March, off in Washington D.C. serving as Civil War chaplain and then dangerously ill in the first part and then confined to study and silent pontificating in the second, only surfacing occasionally.

Laurie is surrogate brother to the girls for the entire first half, and is so desperate to really join their fun that he proposes to two of them, and is finally accepted so that he can officially join the family.

There is both a stern matriarch (Aunt March, the feckless Mr March's aunt) and a kindly, gruff  patriarch (Mr. Lawrence) who is a benefactor akin to Cinderella's fairy godmother, supplying feasts and pianos when they are most needed.

John Brooke, Laurie's tutor, marries into the family, but before that fills the role of dependable son, escorting Marmee to Washington when word comes that Mr March is at death's door and becomes her confidant and she his.

Even Professor Bhaer, or Fritz as I like to think of him, is always more brotherly than loverly, which suits Jo's vision of romance just fine.

Now back to the sisters--it's tempting to say that Louisa May Alcott succumbed to stereotypes in her portrayal of Meg (the homebody), Jo (the tomboy), Beth (the saint), and Amy (the flirt), but her own sisters on which the fictional sisters are based provided excellent models. However, in both real life and in the book, all four girls are much more complex than this simple categorization implies.

I love the fact that all four are part of the Pickwick Club, and play their masculine counterparts in the club without reservation. They are literate and artistic and creative, each in their own way, and they are individuals, capable of growth however painful.

It's also interesting the way the sisters pair up--Jo and Beth (opposites in almost every way) and Meg and Amy (with many similar traits but contrasts in terms of spheres--Meg stays home and Amy goes to Europe!). John and Laurie, as brothers-in-law, are also bordering on the stereotype of the older, responsible brother and the younger, frivolous one.

Despite all this pairing up, I go back to central notion that Little Women is the story of how Marmee and her girls are the nucleus of a family that they grow and strengthen by grafting strong new stock as needed. The pairing up moves the plot along and provides tension and room for themes to emerge, but the core of this family is not the traditional husband and wife pair, but a mother and her daughters.

But...then...I have to remember that this book was published in 1868, when opportunities for education and careers for women were not what they are today. I talked earlier about how literate and creative and individual the girls were. While they owe much of this to Marmee, Mr March (modeled on LMA's father Bronson Alcott) was a progressive when it came to education of both girls and boys. Much as I think that Bronson Alcott's ego sentenced his family to extreme hardship and poverty, his liberalism made the nucleus that was Marmee and the March girls (i.e., Marmee and the Alcott girls) as strong and vibrant as it was.