A Bookshop in Berlin 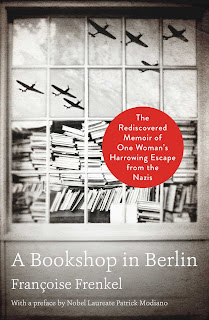 A Bookshop in Berlin, a memoir by Francoise Frenkel, is currently the leading candidate for best book read in 2020. Frenkel was a Polish Jew who loved French literature and in 1921 opened La Maison du Livre, the first French bookshop in Berlin. The first part of the book recounts how the bookshop became an important part of the culture of Berlin, and the anecdotes about her customers and the various bureaucrats she dealt with to open the store and keep it afloat. This part on its own made for enjoyable reading--I always love to read about books and their readers and the conversations they have about what they read.

But then, as we all know, Germany became increasingly dangerous for those deemed dangerous by the rising Nazi party. After surviving Kristalnacht in November 1938, Frenkel closed the shop and relocated to Paris. I make this sound cut and dry--it, of course, was not and Frenkel barely made it out.

The remainder of the book recounts a series of harrowing escapes from the Germans, who occupied Paris in June 1914, and were intent on deporting all the Jews they could find to concentration camps and confiscating their possessions. Thanks to friends and acquaintances who risked their own lives to help her, Francoise fled first to Nice and then to the French-Swiss border, where she repeatedly tried to escape to Geneva.

One of the many things I loved about this book was how Frenkel was able to find moments in which  she could still appreciate nature, her books, and conversations. Amid a life of extreme tension and fear, she remained who she was--a cultured, literate, sensitive person. Her gratitude as well as her fortitude was truly inspirational. She never gave up.

The book was first published in 1945, following the war, and then was rediscovered and reprinted recently.

Francoise Frenkel was born in 1889, making her 51 in 1940, which makes her survival of rough living and physical deprivation all the more remarkable. She returned to Berlin in 1959, seeking compensation for the assets stolen from her when she fled Germany, and in 1960 was awarded DM 3500 as reparation from West Germany. She died in 1975.