Marmee and Louisa, Louisa and Laura 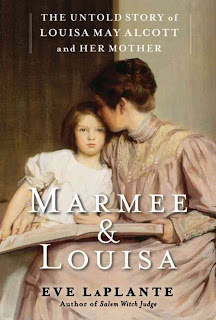 For someone who spent the better part of my life avoiding reading Little Women and hence Louisa May Alcott, I seem to have been doing an awful lot of reading about LMA since I finally read LW a year or so ago.

The latest in my reads about LMA is Marmee and Louisa, by Eve LaPlante, a descendant of the Alcotts.  I really enjoyed the book and felt that LaPlante did a superb job in defending her premise that the relationship between LMA and her mother, Abigail May Alcott, was the most important in her life and was fundamental to her success as a writer.  But then, I was a sympathetic reader from the outset.

Even while I was reading Eden's Outcasts, by John Matteson, which is about LMA and her father, A. Bronson Alcott, I felt that LMA and her mother were closer in affection and temperament than she and her father.  Of course, there is no love lost between me and Bronson Alcott, whom I consider one of the most selfish, egotistical, and hypocritical personages of the nineteenth century.  Anyone who compares himself favorably with Jesus and then lets his family starve and beg their relations for rent money doesn't deserve many accolades for his ability to talk...nonstop...about himself.

Marmee and Louisa is by no means a definitive biography, but that's okay.  I like the laser focus on the mother-daughter relationship, how they interacted, depended on each other, and supported each other.

I also thought LaPlante did a good job of putting their lives into historical context, and I learned a lot of social history about the nineteenth century.  For example, she quotes Nancy Theriot (author of Mothers and Daughters in Nineteenth Century America: The Biosocial Construction of Feminism): "the late nineteenth-century generation...was 'the least married group of women in United States history, with a record 13 percent remaining single," making the point that LMA was not uncommon in remaining single.  It did cross my mind, however, that many of the men these women might have married were killed in the Civil War, but lack of eligible men doesn't undercut the idea that women who worked for the emancipation of slaves might chafe at remaining in bondage themselves.

Whilst reading about LMA and her mother and how this relationship affected her success as a writer, I also thought about that other towering American author for girls, Laura Ingalls Wilder.  Both LMA and LIW came from a family of girls, both were the second daughters of four girls, with still-born brothers; both grew up in poverty, and went to work to support their families at an early age.  Both wrote fictionalized accounts of their youth, smoothing rough edges and reinventing and reshaping events too painful to even acknowledge decades after they happened.  I can't help but wonder about the impact LMA had on LIW, whether she knew it or not.

I do love reading about authors--what drives them, inspires them, influences them, and shines through them.