The History of Tom Jones, a Foundling by Henry Fielding 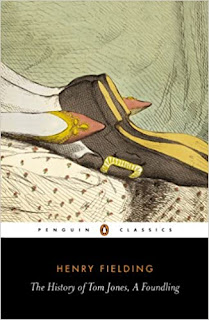 When I heard that the Dickensians! group on GoodReads was reading The History of Tom Jones, a Foundling, by Henry Fielding, for their side read for the Fall, I instantly knew which book I was going to read for the Back to the Classics 2021 challenge in the humorous or satirical category.

I read the book roughly 40 years ago and watched the Albert Finney/Susannah York movie a number of times over the years, so I knew the basic plot line and characters. What I had forgotten was how incredibly long-winded the narrator could be. I decided to listen to a Audible version and I am very glad that I did because the reader did such a good job with all the various characters, including the narrator, that I fear I would have succumbed to scanning sections if I had been reading instead of listening.

I did enjoy the book, although I think I am one of the few in GoodReads group read who did. I found it funny and interesting and loved seeing how Fielding's immensely popular novel influenced Dickens in particular, who reputedly loved the book and read it many times. It's bawdy and irreverent and completely different from the Victorian and Regency-era novels that I tend to choose for my classic reads.

I think Tom Jones' roots can be found in A Pilgrim's Progress, by John Bunyan, published 71 years before Tom Jones was published (1749). Tom is very much like Christian in that he journeys both metaphorically and literally from rascally adolescence to maturity and his reward is the wonderful Sophia Western, rather than the Celestial City. Along the way, he is beset by all manner of setbacks and misfortunes, but the goodness of his heart ensures that he ultimately conquers lust as well as the lying, cheating, devilish characters who take advantage of him for their own selfish aims.

There's also some scenes in which Tom Jones reminds me very much of Shakespeare's Romeo and Juliet, where Sophia is being pressured to marry a rich man and she and her maid (playing the role of the nurse) figure out a way to escape from the situation.

And then, it was fun to see how Tom Jones and Fielding influenced Dickens, from the wonderful names like Squire Allworthy and Mr. Thwakum to the complex and convoluted story full of mistaken identities (much like Shakespeare's Comedy of Errors and his other comedies and romances) and serendipitous coincidences.

The narrator's humor is dry but his observations on the facade of society are pointed. I found him funny, but he did digress quite a bit.

Glad I reacquainted myself with this classic that plays such a big role in the canon of western literature. I did watch Part I of the most recent adaptation (1997) when I was half way done with the book, and now I am off to the library to pick up Part II. 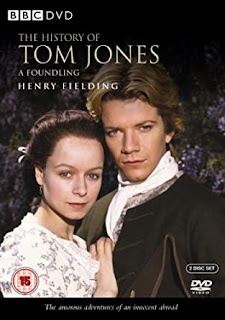