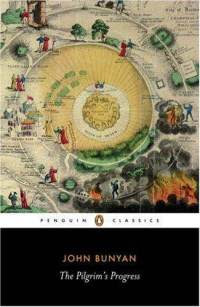 It didn't occur to me to want to read John Bunyan's The Pilgrim's Progress until last year when I finally read Little Women. The March sisters play-act Christian's pilgrimage from the City of Destruction to the Celestial City, and they attempt to shoulder the burdens life deals them with Christian as their model. Only whilst reading Little Women did I fully realize what an impact The Pilgrim's Progress has had on western literature.

Apart from The Bible, until the twentieth century it seems that this book was the most widely owned and repeatedly read books, particularly in America, which was originally settled by the Puritans whose influence on thought and culture is still felt today.

So, with an extra credit from Audible.com, I downloaded an audio version and last month listened to it. Once I got through the rather long convoluted introduction, I found it fairly easy to listen to and follow despite being originally published is 1678. At its heart it is an adventure story peopled by characters whose names give away their role in the story--for example, Christian travels for awhile with someone called Faithful, he fights Giant Despair, and is tempted by Mr. Worldy-Wiseman. Nothing subtle here!

So here's what struck me. Not long into the book, I got a strong feeling of deja vu. It took me until Christian was battling the monster Apollyon, but then the penny dropped and I realized that the tone, style, and especially allegorical/adventure narrative style sounded exactly like that of C.S. Lewis in the Chronicles of Narnia. After I finished The Pilgrim's Progess, I did some Googling and discovered that Lewis's first published allegorical fiction was The Pilgrim's Regress, Lewis's personal revision of John Bunyan's novel. I wasn't able to find any scholarly evidence (not that I honestly looked that hard) suggesting that Lewis knowingly modeled his Narnia books on The Pilgrim's Progress, but to me it's clear that he did.

The other surprise was that there was a second part to the story, in which Christian's wife, Christiana, and children, whom he left when he set forth on his pilgrimage, followed him. I couldn't help but remember the training I received early in my career on making presentations: tell the audience what you're going to tell them, tell them, and then tell them what you told them. It seems that Bunyan, as a preacher, employed this methodology in his fiction, as Christiana and the sons visit all the landmarks that Christian did and either battle with the same obstacles to salvation that they did or are told how valiantly he fought and overcame them. No one reading The Pilgrim's Progress has any chance of missing the point.

After finishing the book, I enjoyed reading the introduction to the Penguin Classics version that I got as a reference should I want to look something up in the future. I particularly liked this passage:

The achievement of Bunyan in The Pilgrim's Progess which gives the work its continuing vitality is the creation, not of allegory, but of myth.


Hearing it read did make me feel as if I was witness to the origin of a myth and not just reading an allegorical sermon. Christian's pilgrimage has transcended story in our culture and become myth.

I'm looking for a reproduction of this map of Christian's pilgrimage, which I think is actually a pretty interesting historical illustration. 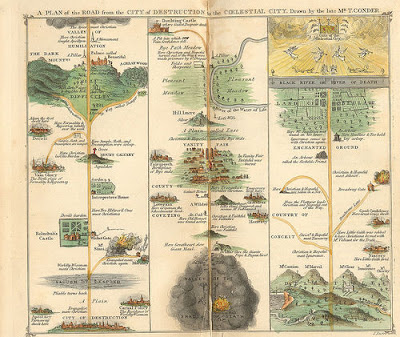