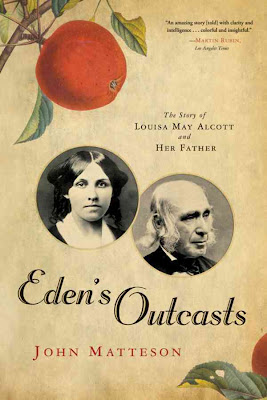 Eden's Outcasts: The Story of Louisa May Alcott and Her Father, by John Matteson, was every bit as good as I hoped and expected. Coming into the book, I knew enough about A. Bronson Alcott to know that I thought he was a selfish crackpot who endangered his family's health and well-being to pursue his experiments in communal living. However, I had no idea what an innocent, well-meaning selfish crackpot he was until I read this book. Like his daughter, Louisa, I ended up forgiving him because his heart was so clearly in the right place, even if his ideas and capabilities fell fall short of the mark.

The most fascinating fact about Louisa and Bronson that I learned from the book was how coincidental their lives and achievements were. Not only were they born on the same day of the same month, November 29, but their greatest literary milestones were passed in the same year (Little Women for LMA and Tablets for her father), and they died within two days of each other. While LMA's literary success and fame far outstripped her father's, their arcs were remarkably parallel.

I found the book a delight to read--well-written, well-annotated and researched, and just the right amount of quotation from letters, journals (both father and daughter were lifelong diarists), and other primary sources. While I enjoyed reading about Bronson's quixotic youth and early struggles to find his place in Transcendental society, I most enjoyed reading about LMA's growth and development as a writer.

Having finally read Little Women last year, I can honestly say that reading this bio of LMA and her father, who was such a strong force in her life, has greatly enriched LW for me. Just today when I was listening to an audio recording of P.D. James' book, Talking About Detective Fiction, she says that "most fiction is autobiographical and some autobiography partly fiction." With the possible exception of the Little House series, I can't think of a better example of what James is saying than LMA and Little Women, which is an unabashed fictionalized account of her life.

Other notable highlights of Eden's Outcasts include a fascinating look at the years leading up to the Civil War and the abolition movement (John Brown's widow and daughters visited the Alcotts after his death) and the part the whole family played in this monumental struggle, not to mention LMA's relationships to the Concord greats, Emerson and Thoreau (who were mentors and teachers) and Hawthorne, who was a somewhat cranky and reclusive neighbor. I am now eager to get to Concord to visit Orchard House, Hillside Chapel, and Sleepy Hollow cemetary.

Having recently finished The Pilgrim's Progress, which was such a primary influence in Bronson's life, and hence his daughter's, I feel like I've completed a mini-course on LMA. Reading Pilgrim's Progess helped me see how Bronson could justify his single-minded passion of pursuing his Eden, just as Christian in Pilgrim's Progress throws off his family responsibilities in order to journey to the Celestial City, leaving his wife and children to journey on their own, just as Bronson's wife and daughters do. I can't say I ever come to admire Bronson Alcott, but I certainly admire his daughter and what she was able to acheive.

I'm not sure I'm such a fan of LMA's writing that I want to tackle her other works, but I found Eden's Outcasts to be an essential companion book to Little Women, which I read because of its popularity over the past 144 years (as in, "what's all the fuss?"), and reading both have enabled me to appreciate and understand the contribution of Little Women to American literature. 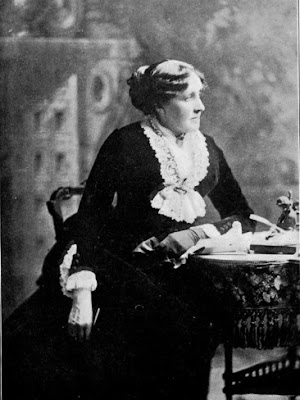