Posted by JaneGS
It just so happened that I read March, by Geraldine Brooks, and Midnight Rising: John Brown and the Raid That Sparked the Civil War, by Tony Horwitz back to back in September.  The coincidence is not so much that they are both books about the Civil War--I am on a CW reading binge--but Brooks and Horwitz are married, and in her Afterword Brooks mentions traveling with her husband countless times to Civil War sites. 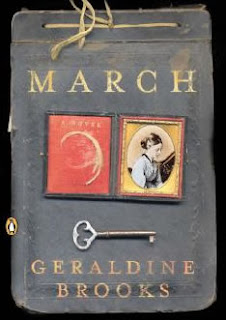 March is a novel in which the main character is Mr. March, the father of Meg, Jo, Amy, and Beth March and husband of Marmee, literature's archetypal mother, in Louisa May Alcott's Little Women.  In LW, Mr. March is a shadowy character, off stage during half the book and in his study or in the far background during the second half.  He rarely speaks, and while the girls adore him, he withers as a character in the face of the force which is Marmee.

As with A Year of Wonders, the other novel by Brooks that I've read, I had mixed feelings about this book, which is why it's taken me so long to blog about it.  It is well-written and the characters and storyline are interesting, just not believeable.  I'm not sure what it is about Brooks' stories, but she always seems to go a step too far in her plotting, rendering me a disbeliever.

I also came to this book having recently read Eden's Outcasts, which is about Louisa May Alcott and her father, Bronson Alcott.  Brooks' portrait of Mr. March draws heavily on Bronson Alcott, just as LMA drew heavily on her own life for the stories and characters of Little Women.  While I am not a fan of Bronson Alcott, I'm even less of a fan of Mr. March.  Brooks took all his worst qualities and magnified them...and yet, the writing is good.

I really think I would've enjoyed March much more if Brooks hadn't leveraged Little Women.  Her main character still could've hailed from Concord, MA, still could've rubbed shoulders with Emerson, Thoreau, and Hawthorne, still could've been an abolotionist, but needn't have been saddled to Marmee and the girls from Little Women.  There's just too much baggage and it weighs the story down with doubt and assumptions and inevitable dissappointment. 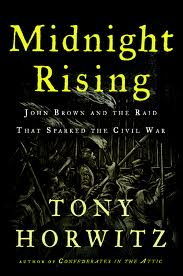 On the other hand, I thoroughly enjoyed Midnight Rising, a bio of John Brown, he whose "body llies a-mouldering in the grave" while "his soul's marching on."  I have known of Harper's Ferry for years, but never really had a good grounding in what led Brown and his family and followers to attack Harper's Ferry, what they hoped to accomplish, or even really what they did accomplish.

I learned a tremendous amount from this book, and really loved how Horwitz was able to link so many of the major players in the Civil War together via Brown's story.  Absolutely first rate history and one that will bear rereading down the road.

Here's a great interview with Tony Horwitz about Midnight Rising on NPR's Talk of the Nation.
at Saturday, October 06, 2012