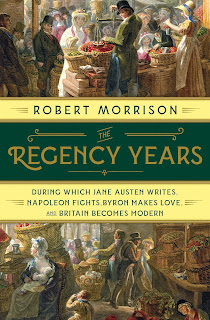 My regional JASNA group has an book club, and our January book was The Regency Years, by Robert Morrison. It was absolutely terrific--essential reading for those of us who love Austen and Keats and history and Britain.

The book was comprehensive, explaining in easy to read, non-pedantic prose the politics and issues of the day, the social issues for all of the classes, slavery and the insidious way it infiltrated everyday life then and into the future. It had a wonderful section on the Napoleonic Wars and the part on Waterloo actually made sense having read Georgette Heyer's An Infamous Army twice. And, of course, it covered the writers and artists, celebrities, actors, and wannabes in extensive detail. I loved the section on the allure of the exotic, which finally helped me understand why the Regent's Brighton Pavilion was built and furnished as it was.

And, I absolutely loved the section on art, especially the Scottish painter David Wilkie and how his paintings are not unlike Sir Walter Scott's historical novels, and the contrast between John Constable's paintings and those of J.M.W. Turner. Now I want to get books on all three of these painters, and I might even finally read Waverly! 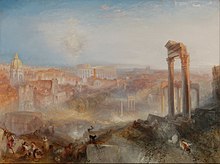 Despite exploring far-ranging topics, Morrison pulled all of the threads together to support his premise that the Regency was the bridge to modern Britain. He not only explores the impact of industrialization and how it fostered the romantic rural ideal and the tug-of-war between science and faith, but he uses Mary Shelley's Frankenstein to represent how technology and scientific advancements can be a two-edged sword, requiring society to figure out how to manage technology and not be destroyed by it.

Here are some passages that I marked as I read:

With regards to Pride and Prejudice:

When she [Elizabeth] tells him [Darcy] that she might have felt more concern in refusing him had he "behaved in a more gentleman-like manner," those words literally stagger him. They signal a powerful collision between his elitist assumptions and her bourgeois aspirations. Darcy believes that he was born a gentleman. Elizabeth hopes that someday he might become one...she ushers in the modern world, for she believes in meritocracy over aristocracy, individual preferences over dynastic alliances, and female desire over male presumption.

With regards to the Prince Regent's Brighton Pavilion:

The Pavilion is his shrine to the expertise, the originality, and the sheer bravado of his Regency, and it reveals the Oriental fantasies at the crux of the decade. Part homage and part pastiche, it is, remarkably, an Eastern structure that most spectacularly represents the British Regency. 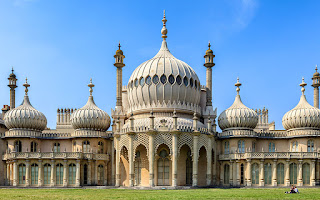 When Byron rated the "three great men of the nineteenth century," he placed "himself third, Napoleon second, and [Beau] Brummell first."

The Industrial Revolution left deep scars on rural England, but one of the most remarkable features of Regency Britain is how many areas of the countryside were virtually unaffected by it...Humphrey Repton was the premier landscape gardener of the age and an enthusiastic exponent of the picturesque, which he defined as a middle ground between the unruliness of nature and the rigidity of art.

More than any other work in English literature, Frankenstein is a prophecy about the modern world. In addition to launching an entirely new genre of science fiction, it has had an incalculable impact on the way we imagine science...Frankenstein unnervingly reveals that scientific research has the potential to improve our lives in countless ways, but that if we deny or ignore our responsibilities, new discoveries have also the potential to pass dangerously far beyond the control of their makers and assume hideous and unpredictable forms that may betray or even destroy us.