Adam of the Road 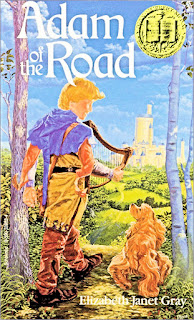 For the 2021 Back to the Classics reading challenge, children's literature category, I decided to scan the list of Newberry Medal winners and see what struck my fancy. There were a lot of great books to choose from, most of which I hadn't read. I landed on Adam of the Road, by Elizabeth Janet Gray, which won the award in 1943.

Adam of the Road is exactly the kind of book I loved in elementary school, and had I discovered it then I surely would have counted it as a lifelong favorite. Set in 1294 during the reign of Edward I, the novel is about Adam Quartermayne, twelve-year old son of a minstrel, Roger. Adam aspires to be a minstrel like his father and loves to sing, tell stories, play his harp, and play with his dog, Nick.

Not only was it great fun to read about Roger's life on the road, but Adam of the Road is chock full of interesting details about life in medieval England, age appropriate, of course. The book starts out with Adam in school St Alban's Abbey, where he is biding his time while waiting for Roger to return from France, where he has been learning new songs and stories for his lord, Sir Edmund De Lisle. So, we learn about life in a medieval abbey--the schedule of prayers and services, the work of the monks and their interaction with the town folk, and their role in the early education of scholars.

Then, Adam and Roger go to London and live in the De Lisle's city home. So, we learn about how people of the time travelled, life in London, squires, knights, ladies, and the education and training of knights.

Then, it's off to Winchester for St Giles fair - Adam is separated from both Roger and Nick enroute and has lots of adventures and meets loads of interesting people while trying to find both his father and his dog. He swims the river Wey, he attends a miracle play, he is caught up in a "hue and cry," and he works on a farm, laboring half the day for the lord of the manor.

Finally, Adam ends up in Oxford, so we learn about how universities worked in medieval times, and Adam is given the opportunity to choose what kind of a life he wants--that of a scholar or that of a minstrel. Will he choose a quiet life of study or a tumultuous, and occasionally precarious, life on the road?

As you can tell, I really enjoyed this book. Adam is a sweet, lovable, plucky boy, and the book is a wonderful way to introduce children to medieval history, from the food, to the clothing, to social structure, to architecture, to holidays and celebrations, and even to politics. Thankfully, I didn't have to read about the dark underbelly of society as this is a children's book. For as much time as Adam was on his own and at the mercy of strangers, the book didn't go into his vulnerability, nor disease, nor the heinous punishments for even trivial crimes that marked the time period. But that's okay, it was a delight to read a sunny adventure book.

Email ThisBlogThis!Share to TwitterShare to FacebookShare to Pinterest
Labels: Adam of the Road, Back to the Classics Challenge, Elizabeth Janet Gray