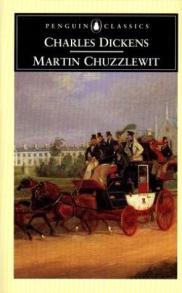 Martin Chuzzlewit is basically a story in search of a hero, with a gallery of rogues and some exceedingly dreary scenes. Dickens wrote A Christmas Carol in the midst of writing this serialized novel, and the basic premise of a grumpy old man redeeming himself is played out in Martin Chuzzlewit but in a much more circuitous way than in A Christmas Carol.There were a few characters that I loved - Mark Tapley and John Westlock and Tom Pinch, once he grew a spine - but there were so many that were simply bad company, including both Martins until near the end.  Mr. Pecksniff makes my skin crawl, Jonas Chuzzlewit rivals Bill Sykes as a villain, Cherry and Merry Pecksniff and the various Chuzzlewit relations are all deplorable, and a little of Sairy Gamp goes a long way. The back of the book I read claims that this is Dickens's "comic  masterpiece." I really wouldn't put it in the category of comedy. I found it mostly leaden with a few bright spots.
As I knew he would be, Dickens was unrelentingly hard on the Americans that Mark and Martin the younger encountered in the US. I can appreciate that Dickens had lots of issues during his own first visit to the US, but he really beat the topic to death. I can recall only one decent American among the dozen or so that figured in the story, and it became quite tedious. It was clear that Dickens had an axe to grind, and I was so relieved when Martin and Mark returned to England, and the real story resumed.I will say, though, that there is some good writing and more descriptive passages than I remember seeing in the earlier novels, so I think Martin Chuzzlewit marks somewhat of a transition in Dickens's evolution as a writer. However, I think the serialization approach to writing a novel presents problems that revising and editing and cooling off would have mitigated. Not sure this one will make it on to the reread pile, but now I have only two Dickens novels left to read for the first time, Barnaby Rudge and The Mystery of Edwin Drood.
As you might have guessed, this book qualifies for the Back to the Classics Challenge for 2021, in the "new-to-you by a favorite author" category.
There is a 1994 BBC mini-series that I may watch to see how the screenwriters dealt with the novel. I think Julia Sawalha (aka Lydia Bennet) is perfectly cast at Merry Pecksniff. 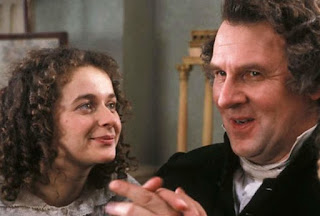 Email ThisBlogThis!Share to TwitterShare to FacebookShare to Pinterest
Labels: Back to the Classics Challenge, Charles Dickens, Martin Chuzzlewit