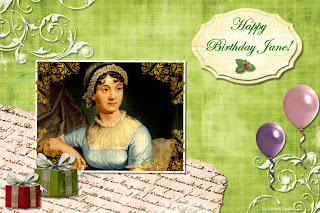 Since it's a party, I decided that we should have party games, right?

First, I thought about trying to automate my S&S bingo game that's currently under development, but the last programming class I took was BASIC in the 1980's, so that idea was a bust.

Then I thought about trying to implement a pin-the-tail-on-the-cad game, featuring Willoughby, Wickham, and William (aka Mr. Eliot), but since that also would require technical skills beyond my ken, that idea also was a bust.

So, for this birthday party post, I decided to go with "Austen Epiphanies." That is, I am soliciting fans not unlike yourself to share your story about what Austen means to you and how you came to be a devotee.

To get the ball rolling, I'll share my story.

Imagine a gawky thirteen-year old figure skater sporting a Dorothy Hamill haircut but without the grace, skills, or poise of Dorothy Hamill sitting on a bench in a humid locker room of a local ice rink in early June with her head buried in a book. The reigning queen of the rink enters the locker room and asks said gawky underling what she is reading.

"Isn't school out for the summer?"

"Mine isn't. I have to finish this for English class."

"Oh, good luck with it. Better you than me."

And that, my friends, was the last time I lied about why I read Jane Austen. I have been cringing about that moment for the past 40 years, feeling that I let down the side. So it's time to come clean. I love to read Jane Austen's novels and have been doing so for decades; I no longer bother to keep track of how many times I've read each one...I ran out of fingers to count on a long time ago!

I've learned so much from Austen--like how to be polite to your mother even when she is embarrassing you to death, how to apologize to someone that you've embarrassed because of your "witty" remarks, how to hold your feelings inside of you when your heart is breaking, and how to proclaim your feelings and not be ashamed of loving dead leaves more than anyone else in the room.

I was reading Austen before VCRs were invented, and it was a special treat when my dad bought me a new copy of P&P with photos in it from the Lawrence Olivier/Greer Garson movie. I studied those photos and dreamed of the day when I could actually watch a movie version of my favorite novel. I did finally watch it after snagging a copy of a VHS tape at a video store roughly ten years later--imagine my shock when I discovered how Olivier, et al had managled Austen's perfect story. Luckily I already had a copy of the Elizabeth Garvie version of P&P that I watched regularly for the nine months I was pregnant with my first baby so I wasn't too devastated by the 1940's version. 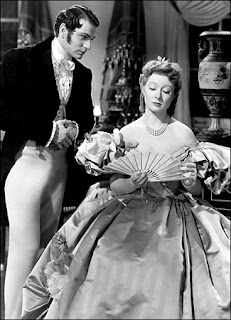 We've come a long way since the days when I was literally the only person I knew who read Austen novels and longed to find someone who had read them too. And then...Al Gore invented the Internet and since then I've discovered legions of Janeites eager to talk about their favorite books, write sequels, what-ifs, and missing scenes, and celebrate the genius that is Austen via t-shirts, coffee mugs, homemade videos, quizzes, tea parties, games, and just plain chat. 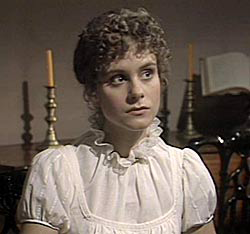 Sometimes I feel a bit overwhelmed by the sheer magnitude of material related to Austen that is out there, but I've also been impressed by the really great work that Austenmania has inspired and the joy she continues to bring into our lives by giving focus to the talents of her fans.

Reading Austen's novels continues to be a key part of my reading life. Reading Austen lit crit continues to bring me great satisfaction and enriches my life. Celebrating Austen's contributions to our culture by reading fanfic, sequels, tributes, spinoffs, and mashups has added a new and sometimes quirky dimension to my life, and quirky is often just what the doctor ordered.

So, here's to you, Jane Austen and your fabulous fans! May you continue to inspire us to keep our chin up, smile in the rain, apologize when we overstep ourselves, do a good turn, write a letter to an old friend, retrench when necessary, and do the best with what we've got.

And, be sure to visit the other blogs participating in this Jane Austen Birthday Blog tour.

Leave your comments along with an e-mail address to have lots of chances to win one of the wonderful gifts we are giving away in Austen's honor:

Entries for the giveaways will close on December 23. Winners will be announced on My Jane Austen Book Club.

Thanks for stopping by...and enjoy the tour.