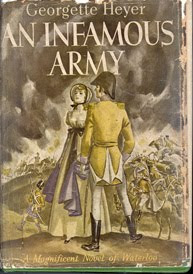 I've been reading Georgette Heyer regencies for awhile now. I have read a respectable number, and reread a couple (The Reluctant Widow and Cotillion), but still have a fair number to get through before I can claim to have read them all.

Without a doubt, An Infamous Army is the best of the bunch. I loved the history, I loved the characters (even though Barbara Childe--aka Bab--is not really the kind of heroine I usually like), and I liked how the story ultimately worked out...not your typical romance but definitely not your typical account of the Battle of Waterloo.

I was completely blown away by Heyer's ability to paint such incredibly vivid pictures of the various international troops that converged on Brussells in the days leading up to the battle and the sights, sounds, and smells of them marching off to war and then straggling back.

I also loved experiencing the craft that Heyer displayed in her treatment of the historical characters, in particular the Duke of Wellington. She seamlessly and naturally told his backstory and integrated his documented words into dialogue at parties, during strategy sessions, and on the battlefield.

Colonel Charles Audley was a wonderful hero--practical nature shot through with a silken romantic streak and a clear-eyed sense of self and self-worth. I really enjoyed his relationship with his sister-in law and brother, Lord and Lady Worth, as well as his befriending of the weepy Miss Lucy.

Like Lady Worth, I ultimately warmed up to Barbara Childe, but I did find her extremely annoying for much of the book and feared Col. Audley was throwing himself and his chance for happiness away. It did strike me that Barbara was cut from the same cloth as Scarlett O'Hara and Becky Sharp--charming, selfish, not afraid of scandal, and not afraid of manipulating those weaker than themselves. In An Infamous Army, I feel that Heyer gave Scarlett and Becky the happy ending and a redeeming quality that Margaret Mitchell and William Makepeace Thackerary denied their leading ladies.

I know that I didn't absorb all that An Infamous Army has to offer, and after reading up on the Battle of Waterloo and Wellington, I plan to reread it. In the meantime, I plan to read its prequel, Regency Buck, which has been sitting on my shelf for far too long.

When I was looking for an image of the book, I found a lot I didn't like--they depict a pretty young woman, minimizing the setting, which is smack dab in the middle of an epic battle--until I found the one shown above. I do rather like the Sourcebooks cover, which is the Amazon link I provided, but that image has been over-used lately and I thought might be a bit confusing.

I did listen to it, and because of that, I found the Wikipedia entry for the novel extremely helpful, especially in the early chapters while I was trying to sort out who's who and the various relationships and alliances.

Now, all I want for Christmas is a movie version--how about a mini-series? 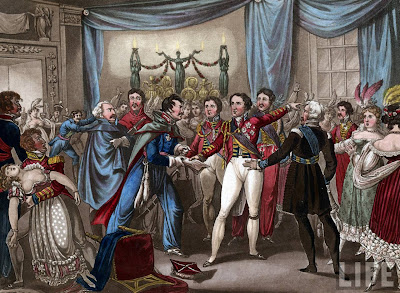 Isn't this engraving of the Duchess of Richmond's Ball on the eve of the Battle of Waterloo just wonderful?
at Monday, October 03, 2011