Men to Match My Mountains 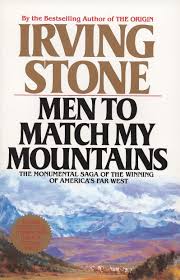 I like Irving Stone. He was in his heyday when I was in my youth, and so I always equate him with the blockbuster. I read his The Agony and the Ecstasy, a fictional bio of Michelangelo, before I went to Italy in 2015, and I've had his Men to Match My Mountains on my TBR shelf for years.

Men to Match My Mountains is non-fiction, published in 1956, and chronicles the story of the American West, 1840 to 1900. Bascially, there are 5 main story threads--the pioneer experience (including the Oregon, California, Mormon, and Santa Fe trails), the railroads (and all the backstabbing, manipulation, false advertising, backbreaking labor, and engineering that went into them), the growth of the major metropolitan areas (San Francisco, Sacramento, Denver, Salt Lake, and Los Angeles), the mines (gold, silver, god) and mining camps, and the Mormons (from polygamy to statehood),

Stone uses the stories of the men and women who starred in these main threads to paint a detailed account of the grit, heartache, and dreams it took to go create the American West so aptly portrayed in Hollywood's vision. While Stone doesn't completely ignore the Native American story, and he does give a fair account of the disgraceful Sand Creek Massacre and the string of broken treaties--it is not one of the main story threads that he follows completely.

Apart from the Native American part of the story, Stone really does recount virtually every story you've ever heard about the American West - the doomed Donner party, the explorations of Zebulon Pike and John Fremont, the scouting prowess of Kit Carson, the infamous Alferd Packer,  the California 49ers, the Colorado 59ers, Horace and Baby Doe Tabor, Leland Stanford and his cohorts in the Southern Pacific, Pikes Peak or Bust, the crazy land rush of Los Angeles, the ties to Mexico, and on and on.

It is a long book, crammed full of details and stories. It is a product of the mid-50s, though progressive in its time, I believe, it is a bit dated. Nevertheless, it was a fun book to read--as a Westerner, I loved reading about so many places that I know well, have visited often, and have wondered about.

Email ThisBlogThis!Share to TwitterShare to FacebookShare to Pinterest
Labels: Irving Stone, Men to Match My Mountains