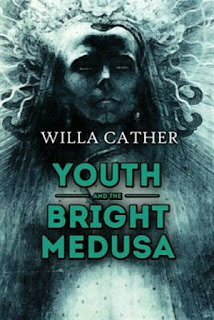 Back before Covid-19 shut everything down, I had planned a trip to Nebraska in early April to see the sand hill crane migration and attend an event at the National Willa Cather Center in Red Cloud, just a short drive from Kearney, the epicenter of the crane migration. When that trip fell through, I toyed with the idea of attending an online Willa Cather conference in early June--I even went so far as to get a copy of the collection of the short stories that were the focus of the conference. Life and work got in the way of actually attending the conference, but I did enjoy Youth and the Bright Medusa, a collection of eight stories written over a 20 year period.

The stories in Youth and the Bright Medusa all deal with the pursuit of art and the loneliness, sacrifices, triumphs, and tragedies that those blessed (or cursed) with great talent must contend with as they try to live with and live up to the expectations of themselves, their teachers, their families, their patrons, and their audiences.

I ended up reading this book rather slowly, not wanting to race through the stories, but reading one or two a week so that I could think about them and let them settle into my thoughts gently.

I think my favorite was the last one, A Death in the Desert, about a singer who is stricken with tuberculosis and is dying and encounters the brother of her teacher and mentor during her last days and uses him to help her reconcile herself to leaving the world before her time.

Paul's Case was a very strange one--almost surreal--about a young boy who cannot accept the mundane, hum-drum life that he is forced to live and so devises a way to live, if only briefly, in the way he thinks his artistic temperament deserves.

Most of the main characters of the stories share much with Thea Kronborg of Cather's The Song of the Lark. They are mostly from small towns on the eastern Colorado or western Nebraska prairies, which they leave to pursue their art in Chicago, then New York, then Europe. They are often exploited, rarely at peace, but dedicated to living the role they have been given. There's a somber quality to the stories and tone, but Cather's poetic writing lifts them and makes them shimmer.

Cather is definitely becoming one of my favorite authors.

Email ThisBlogThis!Share to TwitterShare to FacebookShare to Pinterest
Labels: Willa Cather, Youth and the Bright Medusa