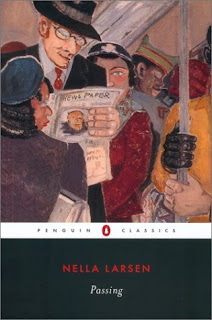 I recently read a few reviews of Nella Larsen's Passing and promptly added it to my summer reading list. It was only after I glanced at the title page and saw that it was first published in 1929 did I realize that it would qualify for my 2020 Back to the Classics challenge in the category Classic by a Person of Color.

Here is Larsen's bio on GoodReads:


Nellallitea 'Nella' Larsen (first called Nellie Walker) was an American novelist of the Harlem Renaissance who wrote two novels and a few short stories. Though her literary output was scant, what she wrote earned her recognition by her contemporaries and by present-day critics.

Passing is the story of two black women who are light-skinned enough to pass as white. The main character, Irene, is married to a black physician and has two sons--one who is light-skinned like her, and another who is darker, like her husband. She lives a life of relative comfort and is active in her Harlem community--serving on committees, hosting parties and teas, socializing, shopping, and priding herself on her devotion to her sons. Irene only "passes" when it is more convenient to do so than not. For example, the book opens with her feeling ill while shopping, she hails a cab and the driver, thinking his passenger is a white woman, suggests she go to rest at an exclusive restaurant where she would be barred from entering if the staff knew she was a black woman.

Irene's nemesis is Claire--a beautiful, golden women who left the black community after her father died and she was cared for by elderly white relatives. She married a white man who doesn't suspect his wife is black, and she has never told her daughter of her real race. Irene and Claire met again after many years when Claire recognizes her in the restaurant where she is "passing."

While the themes of the novel do focus on the ethics of "passing" and what it means to shed or assume an identity within a prescribed community, the real tension of the novel stems from the ambiguity of whether Irene's husband has actually fallen in love with Claire and what this means for Irene and her sons.

Irene's husband is unhappy because he wanted the family to emigrate to Brazil in order to escape the racism of the US, but Irene refused to support this idea and now must live with the knowledge that he fears for his sons' future in a society that is so prejudiced against them.

While this seems like a novel of manners, it actually feels a lot like a thriller. It felt to me like Claire was stalking Irene. Certainly her presence unsettles Irene to the point where it feels like Irene is mentally cracking.

Passing is a short novel, elegant in its prose, and tightly wound. It crackles with tension. While Passing is the story of two black women, it speaks to the very real situation of someone trying to pass for something other than they are, whether that be more competent, more skilled, more educated, smarter, kinder, or better than you actually are. I doubt there is anyone who hasn't tried to "pass" at some time in their life. This story uses race and the experience of being black in white America to illuminate the human desire to pass and the dangers inherent in not being true to who you are and what you truly value.
at Sunday, August 02, 2020