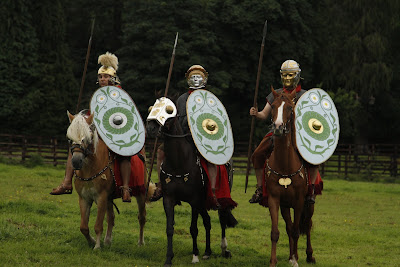 Carraw B&B was absolutely excellent -  very rural but modern, open, clean interiors. We stayed in the annex and the amenities were luxurious.  Dinner was homemade cream of onion soup with crusty bread, fruit, cheese, and pate. Perfect! 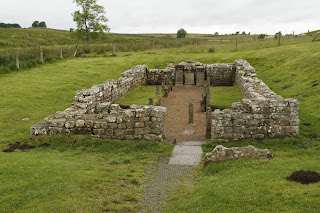 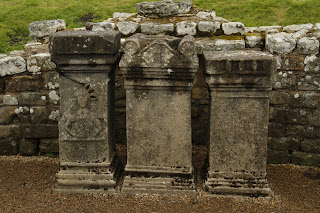 Rained overnight and woke to off-and-on showers so donned rain gear for the first part of the walk.  Our first stop was the  Brocolitia Fort, outside of which were the remains of a temple to Mithras, built by the Roman soldiers from the fort.  Another sacred spot that inspired whispering despite the passage of time since people worshiped here. 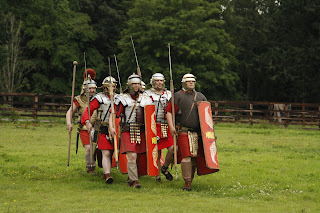 We planned only a short walk for this day as we wanted to spend all afternoon at Chester's Fort in Chollerford where the English Heritage was hosting a Roman Cavalry event with reenactors. We arrived just in time for the 1 pm performance and got to see a small unit of soldiers fully outfitted and with a centurion (commanding officer) drilling them. I was particularly excited to see them create a shield wall, about which I've read so much. Next came three Cavalrymen, two of which were wearing Cavalry helmets with full face masks.  The announcer, who was part of the reenactor group explained everything they and their horses were wearing, and then they did some drills with spears and shields in full armour. 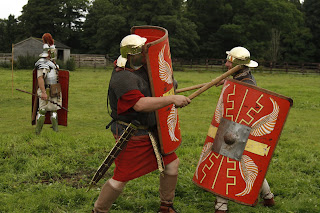 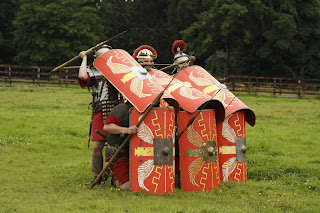 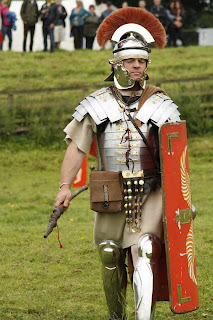 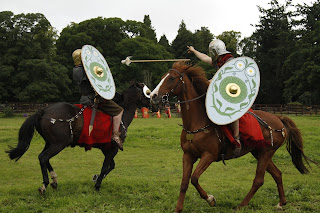 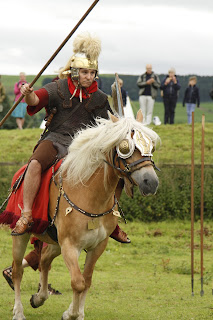 The fort itself is incredibly well excavated. Here we saw the tallest walls, and the bath house down by the Tyne even had the cubbies in the changing room where people could leave their clothes while they bathed. You could also clearly see each of the rooms, with some of the baths still partially there--you could actually progress from the warm room, to the hot room, hot baths, and then the cold room. 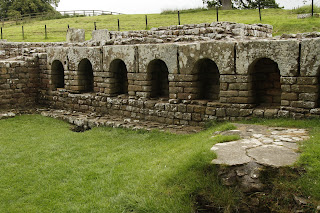 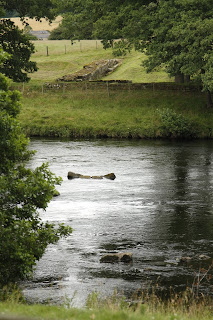 I also really loved looking across the Tyne to the remains of the abutments of the Roman bridge that crossed the river at this point.

We ate sandwiches and drank lemonade at the fort cafe, and then toured the museum, which was basically a warehouse of artifacts found on the site--hundreds of altars and tombstones, as well as pottery, cavalry horse armour, etc.

After the fort, we walk into Chollerford and had a drink at the George Hotel, which used to be a coaching inn back in the Georgian days.  Very pretty garden that faces the Tyne--enjoyed the sunshine and had my first shandy (lemonade and ale), which I liked quite a bit! 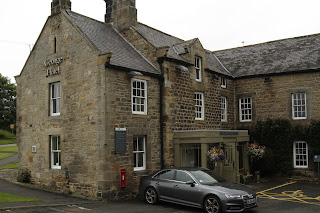 Then up the hill to our B&B in Humshaugh. Dinner at the Crown Inn, which was packed on this Saturday night, and then a good night's sleep at the Mingary Barn, which was actually an old stone barn, modernized for 21st century living.
at Thursday, July 20, 2017