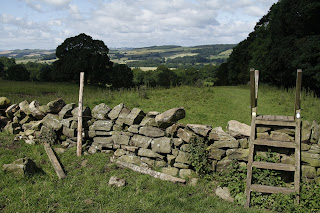 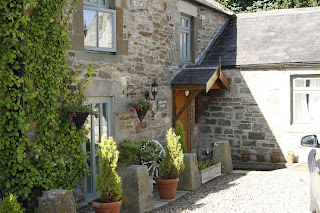 Breakfast at the Mingary Barn was another set up of eggs, fried ham (aka bacon), very tasty sausages, tomatoes, and beans, which I always decline. We had a great time chatting with our fellow guests--a London couple who were walking end-to-end in the opposite direction from us, and a Yorkshire woman who now lives in the U.S. and was only walking three days and was about to set out on her first day. It was interesting to compare notes. Everyone has different reasons for walking, different time pressures and work/family commitments, and different things they hope to get out of doing a trek like this.

We started by taking a half mile detour from the trail to take a closer look at the ruins of the Roman bridge abutments that we viewed from the Chesters' Fort bathhouse ruins across the North Tyne. Well worth the detour as the river is just lovely there and since we got an early start, we had the place to ourselves.

After the detour, there was another diversion so we ended up walking a good bit along a fairly busy road that didn't have a very wide shoulder and we debated a good bit about which side was best be on--facing oncoming traffic or having it come up from behind. There were plenty of hills and blind curves to make the case for both. There was one stretch that went down a road that had absolutely no shoulder and the hedges along the roadside were overgrown. Luckily, no cars came through--walking early in the day has that advantage--and I imagine it rarely gets traffic, which is why the powers that be designated it for the Wall path diversion. 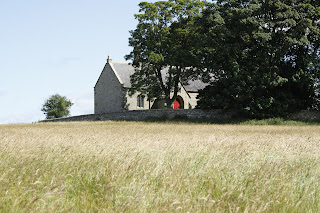 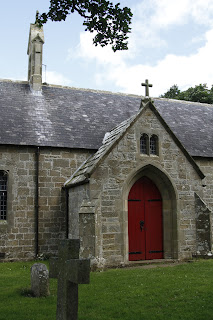 We stopped at St. Oswald's Church, located at the top of the hill of the Heavenfield battlefield, where Oswald, King of Northumbria, was killed in battle in 642 CE. He became a saint soon after.

The church had no electricity or heat--just gas lights. No one was around, but the door was open, so we went in and read the info posters, took pictures, and left a donation.  I was thinking that it would actually be pretty cool to attend an Easter or Christmas service in a church like this. I have no idea whether services are ever held there, but it was Sunday morning and nary a parson in sight.

North of the church was a plaque identifying all the points of interest that you could see on a clear day. I didn't recognize most of the place names, except for the Cheviot mountains in southern Scotland. Sure enough, the day was clear and bright and we could make out the mountains, which was a real treat.

We picnicked along the way, having had the presence of mind to buy a couple of sandwiches and some fruit from the Mingary Barn owners.  And we birded along the way, but didn't see anything new--mostly blackbirds, crows, and ravens, sparrows, and  swallows, martins, and swifts.

As the day progressed, we encountered more and more people out for a Sunday stroll, and by mid-afternoon we found a pub, the Erthing Arms, open and ready for all the Sunday walkers and pleasure seekers. It was a real treat to stop for refreshment and rest in the sun and breeze.

Most of the day's walk was along the Military Road, which pretty much runs the same course as the Roman road that ran east/west south of the wall/forts and was used for moving troops and supplies between the forts and milecastles and towns.

As we approached East Wallhouses, the path was mostly in the Hadrian's Wall ditch, which ran alongside the wall to the north of it. At times, we were actually well below the grade of the road, which was sort of a weird sensation to have cars whizzing by above us.

Just before we reached the Robin Hood Inn, our B&B for the night, we finally saw our first robin (our first real English robin, not the grossly misnamed American Robin). 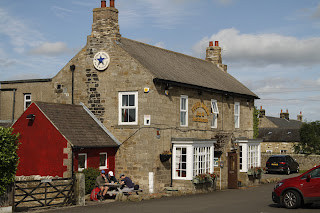 The Robin Hood Inn was another very old building, but had been updated with modern bathrooms. Food and accommodation were great. I had a roast beef and Yorkshire pudding dinner that tasted straight out of my childhood. I loved the carvings in the booths in the dining room--I dubbed one Mr. Pickwick, and could easily imagine the Pickwick Club pulling up in a coach and coming in to the Robin Hood Inn for a bowl of punch.

I never did ask why it was called the Robin Hood Inn since it is not near Nottingham Forest, but I will next time I visit.