Hadrian's Wall Travelogue: It's a Wrap 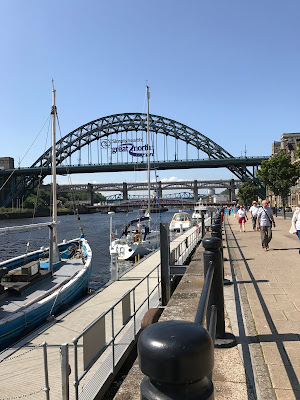 And now we come to the urban part of the trek.

Leaving the Robin Hood Inn, we walked through fields to Heddon-on-the-Wall, a charming village that definitely caters to the wall walkers that pass through. A lot of walkers who do the east-west walk stay their first night here.

We ate at the Swan, which is a chain of pubs, and it felt like a chain. Not the best choice but the food was alright; the environment just felt a bit forced.

After lunch we walked down a steep hill to the Tyne, where we found the Wylam Waggonway. I had wanted to visit the George Stephenson birthplace in Wylam, but it is closed in 2017. Stephenson was a pioneer of the railway age, inventing steam engines and convincing the British government to support his vision of the future.

The Waggonway was lovely--wide enough for us to walk side-by-side and let cyclists pass.  Lots of people out strolling/biking along the river.

Arrived at Keelman's Lodge in Newburn, which is managed by the Big Lamp Brewery. We lounged in the sun after checking in, had a pleasant evening surrounded by happy families enjoying the lovely summer weather.

Our final walk through Newcastle and out to Wallsend where the Segedunum Fort ruins mark the end of the wall path was our longest day, and according to Runkeeper, the most I have walked in a single day.

We got an early start and stopped late morning for a latte in Elswick, a western suburb of Newcastle.  We also spotted another new bird--a couple of very pretty Shelducks were just outside the coffee shop. Fueled with coffee, with enjoyed our walk through the city centre, and had fun spotting the seven bridges that span the Tyne and trying to take pictures that included as many of them as possible.


Signage through Newcastle was inconsistent, and we got a bit lost on the eastern edge but kept on going due east and hooked up with the trail at St. Peter's Basin, where we stopped for a pub lunch.

The last stretch to Wallsend was disappointing. Trash and graffitti littered the path, and despite the abundance of wildflowers (they literally grow everywhere), those last five miles were the hardest. I just wanted to finish. There's a section of the Tyne where signs warn people to stay off the river's edge because of chemical saturation from the plants that are gone but their effects live on. It will take years for the river to recover, and I felt badly for the gulls and other birds living on the river. 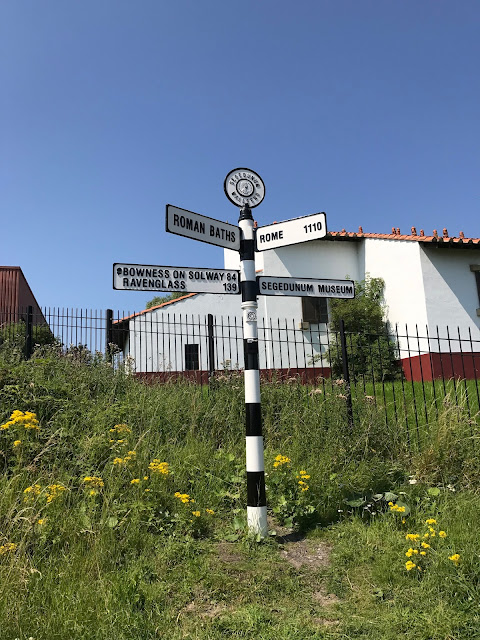 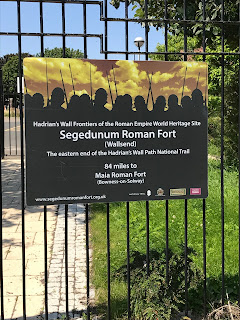 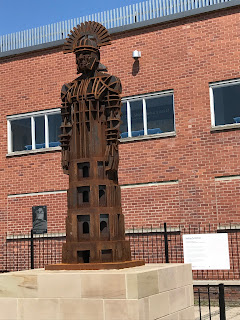 While the last five miles were not pretty, I'm so glad that they were at the end of our walk instead of the beginning. Once we got to Segedunum, and stamped our passports for the last time and had a look around, we felt elated at finishing the wall. Later that night, at dinner at our hotel in Newcastle, euphoria set in!

After Newcastle, we took the train to York and spent the afternoon at York Minster, and then the next morning at the National Railway Museum, both of which were fantastic and well-worth the extra day to visit.  Bird note - we got another new bird in York, the Ouse was full of Graylag Geese. Our total new number of new birds on the trip is 27!

Jeff and I both really liked the focus and intensity that walking the Wall gave to this particular vacation. I loved spending the last six months reading about the Wall, Roman Britain, and Northumberland in general, and we both were so glad that we had the time to enjoy the scenery, the history, and the people we met along the way.

York Minster had an exhibit on pilgrimages in general and the Camino de Santiago in particular. We discussed whether this trek was a pilgrimage and I'm still not sure that it was. We didn't walk it to prove anything, or to overcome anything, or to memorialize anything. However, the act of walking every day, climbing impossible looking hills, following a path marked by acorns, and feeling the sun and the wind and the rain was both truly calming and energizing.

Use a couple of maps and make sure they're waterproof. And then don't trust the mileage. We ended up walking further every single day than we had thought we were going to do--even when we didn't deviate from the path and visit a fort or museum or pub, the mileage on the trail maps are all deceptively short.

Believe the guidebooks when they say there are no services once you get past the first part of the trail at either end. We would have gone hungry had we not bought sack lunches from the B&Bs in the morning. We had this notion that we would be stopping at pubs for lunch every day. That only was possible on the first and last days, and the ones we encountered stopped serving lunch at 2 pm.

Jeff carried 2 liters of water in the reservoir in his backpack and we needed most of it.

As I said earlier, we couldn't have done the trail without trekking poles, ibuprofen, and Mars Bars. We also carried camp stools on our backpacks, and were thankful for them when we wanted to rest and didn't want to sit on the wet ground.

Compeed bandages are essential. Neither one of us got blisters, but I wore two on my left shoulder for most of the trip as my backpack ended up digging into my shoulder enough to be a problem.

We packed as light as possible but needed a larger suitcase than our carryon bags for the hiking poles (even when disassembled). Hiring a luggage service to transport our suitcases was essential--we saw a few people who were actually backpacking and I honestly don't know how they made it through some of those narrow kissing gates.

Since we knew we were stopping at museums and forts we each got an English History international visitor's pass for £32.  Everything we visited on the Wall except Vindolanda and the Roman History Museum were English History sites.

One of the things that frustrated me in the planning stages was that roughly half of the B&Bs are cash only. That meant carrying more cash around than we typically do on vacation, and being remote meant there weren't cash machines handy so we had to think through what to carry and where to reload.

The season for walking the path is April to October, and the trail managers really discourage hiking outside of this time frame because of the damage to the trail that walking in mucky weather does.

If you want to walk in the summer, book early. I booked our July trip in February and got everything we wanted, but we talked to someone who booked in March and she found some places already full up because many only have 3-4 rooms. All of the places we stayed were either on the trail or within half a mile. Some people who used a tour group to book needed to go to a pickup location and be driven to their lodging. It was important to us to be completely on foot for the entirety of the Wall trek, so we didn't even want to take the AD122 bus that goes between Wall locations and the nearby villages. Also, it seems that many of the B&Bs have arrangements with the tour groups, so I think a certain number of rooms are just not ever available to individuals.

I think that's it--great experience. Loved every minute of it. Starting to think about where to walk next!