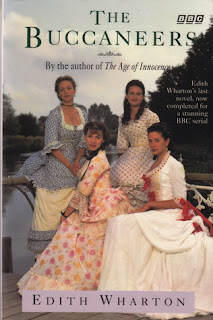 After finishing the Anne de Courcy's The Husband Hunters, I dived straight into Edith Wharton's last, and unfinished, novel, The Buccaneers.

I had seen the mini-series quite awhile ago and liked it and sort of remembered the basic outline of the plot, but it was great to read the novel. It was actually a very easy read and a fairly straight-forward plot--four young American girls find New York society impenetrable and so, along with their mothers and their father's cash, head to England to find mates.

The protagonist of the story is Nan St. George, the youngest of the lot, naive, dreamy, artistic, romantic, and talented. I loved the relationship between her and her English governess, Laura Testvalley, who shows the girls the ropes, introduces them, and wants to protect Nan from throwing her life away on a loveless marriage to a peer.

The focus of The Husband Hunters was on the ravenous quality of the American mothers who insisted that their daughters marry aristocrats, in some cases literally forcing them to do so. Wharton, however, chose to focus on the ambitions of the girls, painting the mothers as vague, indolent chaperones who were definitely out of their league and comfort zone.

Wharton completed 29 chapters of the novel before she died in 1937. These were published posthumously in 1938. In 1993, Wharton scholar Marion Mainwaring finished the novel, adding 13 chapters to mixed reviews. I only read the 29 chapters that Wharton wrote as well as her synopsis of the plot, which sketches out her intentions for Nan and Laura.

I felt that the 29 chapters I did read were extremely polished--it's hard to see them as first draft material, so perhaps Wharton polished as she wrote or they have been further edited. I don't know.

The Buccaneers is an interesting story and the ending that Wharton planned is bittersweeet--definitely less bleak for the protagonist than is usual for a Wharton novel but still not an unqualified happy ending.

This is my first book completed for the Back to the Classics Challenge 2020 - category Classic by a Woman Author.

The also counts in my Classics Club, leaving only one book unread on my list, The Mayor of Casterbridge by Thomas Hardy.
at Sunday, February 09, 2020