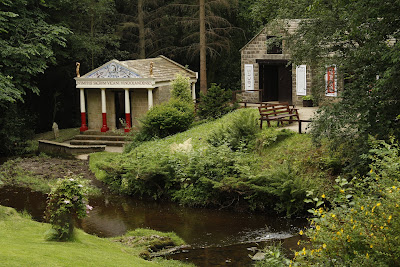 We took a layover day in Once Brewed in order to visit Vindolanda, a pre-Wall fort south of Once Brewed. After breakfast at Vallum Lodge, we had a lazy morning, snoozing, catching up on notes, reading, and repacking. Vallum Lodge offers laundry services, which we jumped at.

Late morning, we walked about a mile and a half to Vindolanda. It was a lovely day--sunny, breezy and soft. The site and museum were exceptional--clear maps, great plaques with interesting descriptions.

The site is currently being excavated--they had recently discovered more writing tablets earlier in the week--and we enjoyed chatting with a volunteer, who enjoyed taking a break. She has worked every season for over ten years, and showed us bits of pottery she had just found before we arrived. It's hard, painstaking work but fascinating. 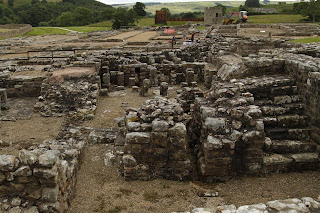 In addition to the excavations currently underway, the Vindolanda Foundation also does recreations to help visitors visualize the Wall and fort system.  Here is a portion of the Wall reconstructed to full height. 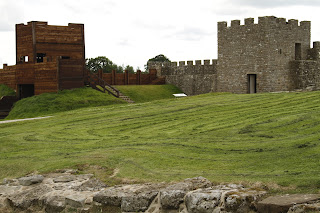 After a great lunch at the cafe, we visited the excellent museum--so well organized, informative. Especially interesting were the varieties of shoes displayed--everything from soldiers boots to ladies sandals and children and baby shoes. I was thrilled to actually see the Vindolanda tablets--bits of wood with writing that were discovered in the 1970s and that revealed so much about life in northern Roman Britain. They were under infrared light and impossible to decipher, although their images were projected so you could actually see the writing.

It seems that so many walkers are severely limited by time or on a mission to do the wall as fast as possible and so skip most of the sites and museums. Since we live so far away and are genuinely interested in the history, we planned our trip so that we could see everything and not feel pressure to keep moving.

Vallum Lodge was excellent--Claire, the owner, has everything down pat and it's efficiently run, pleasant, comfortable, and well-situated, less than a quarter mile down the road from the Twice Brewed Inn, a pub/restaurant/lodge where we ate dinner both nights. Only place to eat if you're on foot.

There's a new visitor center, dubbed The Discovery Center, that is opening the end of July. It is quite large, cool design, and promises great exhibits on history (not just of Roman Britain, but Northumberland since the Romans left), geology, biology, weather, agriculture, etc. I was so sorry to miss it.

After our layover day, we were eager to get on the trail. Our next step was Carraw B&B.

The first three miles of hiking were quite strenuous. Lots of steep climbs and descents, requiring trekking poles and careful footing. Views were tremendous, and the famous Sycamore Gap tree was fairly early on. We got an early start, so we could take lots of pictures without other hikers in our way.  Just for the record, this was voted the most photographed tree in Europe in 2016, and if it looks familiar, then you recognize it from the Kevin Costner Robin Hood film, Prince of Thieves, which I will be rewatching just to see the tree! 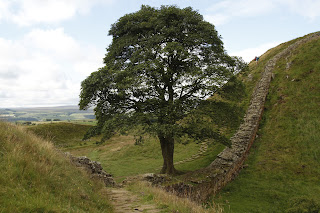 With the exception of the Sewing Shields crags, I found what the guidebooks said to be true--the views are best walking west to east. We had great view of all the crags as we approached them, except Sewing Shields, and even after we climbed up and descended, I never did get a view of these crags. 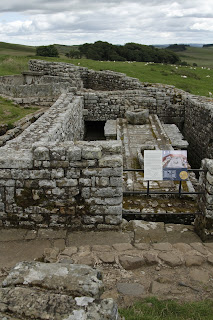 Stopped at the Housesteads Fort. The fort itself is extensively excavated but I was surprised and disappointed that there wasn't a museum. There was a shop, the back of which had a few artifacts on display and short movie. On the site itself, the plaques were well done and informative, but the wind had picked up and so we were blown about quite a bit trying to read up on the history of the fort. We did get to see the all-important lavatory for the fort--a small room to serve the 500 soldiers stationed there! It's the most complete excavated lavatory from Roman Britain, and was the top of my list to see at Housesteads, weird as that sounds.

After we left the fort, we had lots of company along the trail as many of the people who drove to the fort did hikes from Housesteads in order to see some of the magnificent scenery. We found a sheltered spot next to the wall where we picnicked on the sack lunch we bought from Claire at Vallum Lodge that morning. Delicious homemade meat pies, chips (aka crisps if you're not American), cookies, and apples.  Good thing we decided to bring a lunch as there are absolutely no places to stop for food or drink at the top of the Wall path. In fact, I think the shop at Housesteads only had candy and chips.

We saw a several gorgeous loughs (small lakes, pronounced lochs, I think), and with the sunshine dappling on them, and surrounded by field of green, they were breathtaking.

We arrived early at the B&B--checkin time is typically 4-7 pm, so we lounged in the sun for almost an hour, which was a treat in itself.

Another wonderful day high above the farmland, in the sun and wind, surrounded by wild beauty and the remains of a powerful civilization whose impact permeates modern life.
at Wednesday, July 19, 2017