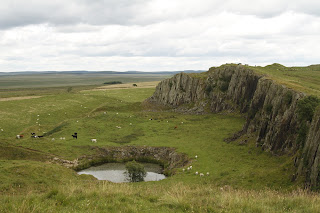 Greenhead to Once Brewed

Steps not recorded because I used hiking poles all day long.

First--Greenhead Hotel was not a good choice. Whole place is shabby and the room was small, overlooked the main road, bed was small, bathroom ancient. Shower head came off in Jeff's hand, spraying water all over the room. Couldn't open window for fresh air as tea things in way. Dinner was mediocre; breakfast was the usual ham/bacon, sausage, eggs, tomatoes, beans, toast. 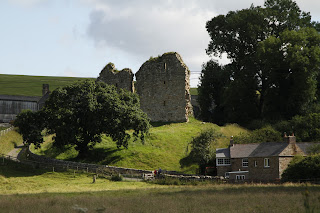 Easy walk from Greenhead to the Wall Path and then up a short distance to the remains of Thirlwall Castle. Lovely ruins--it was a bastle house on a hill, and the walls were thick. We saw swifts at Thirlwall Castle. Would love to come back and spend more time in the area, but that would require doing extensive reading on Sir Walter Scott, who basically put Gilsland and the surrounding area on the tourist map.

Another easy walk to the Roman Army Museum--got there near opening time at 10 am.  Wonderful museum--huge school group with about 100 8-year olds running around.  Okay except they made it hard to hear the 3-d movie. Bought a ticket good for both this museum and Vindolanda Fort, both of which are run by the Vindolanda Foundation.

The 3-d movie was pretty good--it wasn't exactly on par with the HBO series Rome, but was a good way to visualize the Roman army in the area. The museum itself was first rate--good clear exhibits, and a good balance between telling the story of the invading Romans and the native, occupied Britons.  Well worth the hour and a half we spent there.

Bought sandwiches and candy bars from the cafe to eat along the way. My new saying is that I couldn't hike the Hadrian's Wall Path without trekking poles, ibuprofen, and Mars bars. 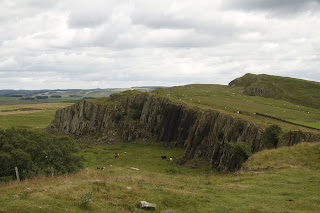 From there we mostly climbed all day, either up or down, rarely level. Fantastic views--wall exposed for long stretches, and many turrets and milecastles provided a good excuse to stop, take pictures, and rest.

Trekking poles required both up and down steep slopes where you really had to pick your way carefully.  Would be extremely hard to do in any wet weather.

Sunny and breezy all day--I got sunburnt and wind burnt, despite wearing sun screen and a hat all day.

Encountered many wall walkers--mostly Brits, Americans, and a large group of Germans. Many were just doing day hikes or a 3-day stint along the wall, but some were end-to-enders.

Sheep everywhere except the very highest stretch along the Whinshields Crags. 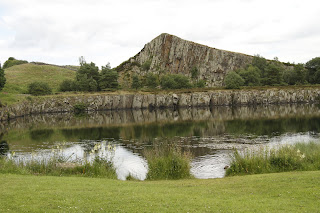 Walltown Quarry area with a small pond was lovely. Lots of people in cars picnic there and then do short walks up along the walk. We saw one young family with the father carrying a toddler on his shoulders and the six-year old scampering around in flip-flops. My feet hurt just watching him! 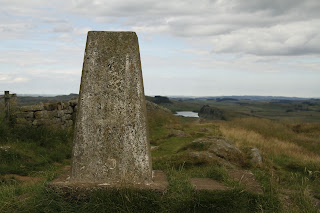 Shortly after reaching the highest point on the path, we climbed down to Once Brewed where the Twice Brewed Inn is located, and our B&B, the Vallum Lodge was just down the Military road a bit.  Relaxed, did laundry, and then headed back to Twice Brewed for dinner--it's the only place around and was packed! 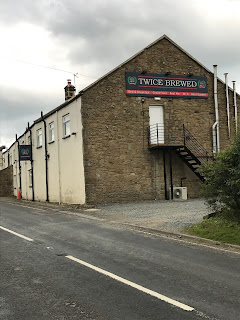