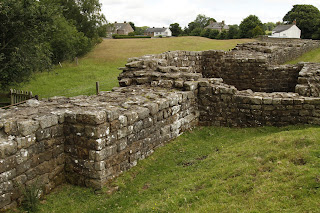 43 flights of stairs according to my Garmin Fitbit wannabe--steps not accurate because I used trekking poles for some of the day. 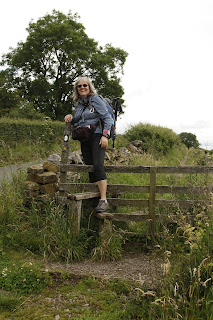 Started with another communal meal--breakfast at B&Bs are that way, and I opted for pancakes this time and bacon while Jeff had yet another English breakfast, but no beans this time. Good thing we're walking all day!

Climbing Hare Hill we stopped and watched birds at a bird feeder and identified a Siskin. 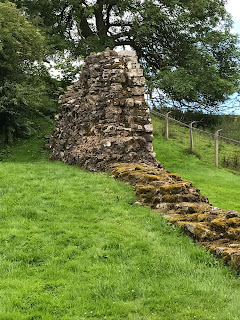 Saw the wall first at the top of Hare Hill (and did a selfie) after which we stopped at remains of turrets and milecastles on our way to Birdoswall Fort, the first Roman fort that has been excavated at this end of the wall. Beautiful vistas of the Pennines to the south, and rolling grassy hills covered with sheep and cattle all around.

Saw some very shaggy cows near Birdoswall. As we neared the fort, we walked along the wall for a good stretch. After arriving, we had lunch in the cafe, then we toured the site--the cafe is in the tower next to the Bastle house. We ended up getting a guide book at each fort/museum and did some reading in them each night.

Here is the Bastle House on the Birdoswald Fort site--it operated as a farm until fairly recently. 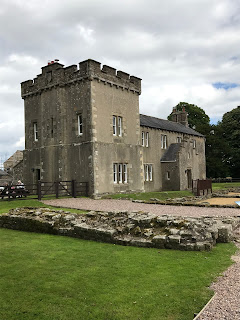 The plaques at all the sites are really good--here's a great example. 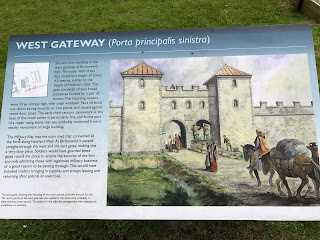 We walked to the very back of the fort perimeter, and looked down a steep incline to the Irthing River below. Absolutely gorgeous. 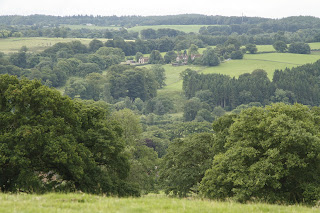 Started walking again around 2 pm--needed the trekking poles for long steep climb down to the river. Crossed the new Willowford bridge (1999--helicopter placed it) and then went on to see the remains of the Roman Willowford bridge. River must have changed course over the last 2 millennia as the bridge abutments were far from the river itself.

Long, tiring trek to Gilsland--lots of steps and hills and climbing. Diversion through Gilsland and so backtracked to Poltross Burn milecastle. Met up with tour group and listened in a bit. This milecastle was built on a hill so interiors needed steps within one side of room to the other.

Took break and drank water, ate trail mix and used camp stools soon after Poltross Burn milecastle, before final leg to cutoff to Greenhead. Young man gave us directions to Greenhead shortly after we came down off trail and were looking at map.

Greenhead hotel was pretty shabby--not on same level as any of the BBs, but okay for one night.

Here is an image of the ditch, which runs north of the wall and is part of the overall defensive zone of the wall. 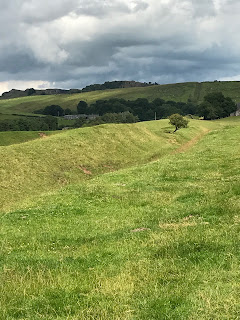 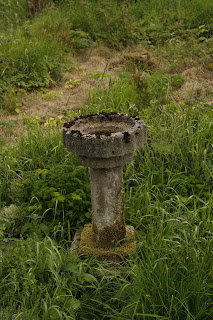