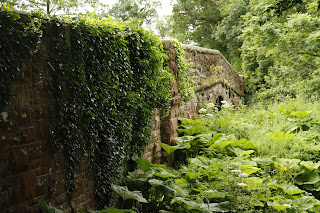 Left Roman Wall Lodges after a panini breakfast with tea/coffee. Here's our rustic cabin--comfortable with everything we needed for a good night's sleep. 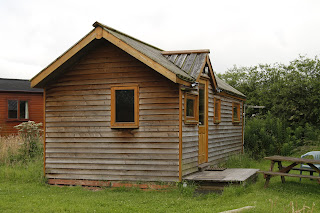 Backtracked up the road to St. Mary's church in Beaumont and then walked along roads, through fields, and along the Eden River. Saw a blackcap warbler in Kirk Andrews on Eden and a marsh tit (a lot like our chickadee except the songs/calls are different).

Most of the other people on the trail were locals going for a walk with their dogs. We saw a bunch of birds swoop out of a hedge and the passing farmer said that meant rain within an hour, but it only sprinkled slightly.

Saw lots of wild foxglove, daisies and other wild flowers. When we took the diversion through the Carlisle suburb of Newtown, we saw lots of hydrangeas and roses.

In Carlisle, we went to Direct Sports (lucky it was open on Sunday as many shops and restaurants were not), and replaced my backpack buckle with that on a inexpensive waist pack that we bought. Then we hit the cash machine outside of the Crown and Mitre hotel and had lunch at the Dutch Uncle. Shared a delicious sausage/basil pizza and steamed fish--Jeff had a Carlisle Bell ale from the Carlisle Brewing Company.

After lunch we headed to the Sands Centre, where we stamped our Hadrian's Wall passport in the cafeteria, crossed the river (another diversion), and walked through Rickerby Park. Saw a few Wall Walkers but most of the others were locals enjoying the sunshine, blue skies, and light breeze.

Saw three mute swans along the river--two adults and a cygnet, who were shy and swam away when we stopped to watch them through our binoculars. 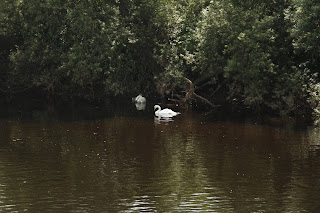 The trail was mostly through parkland with a stretch along a road--we crossed the M6, and then walked through Linstock, which was all residential.  Next came farm roads where we saw a buzzard circling above a field.

There was another diversion at Park Broom, which took us to our hotel, situated on a busy road, that we had to dart across.

Lovely big room, but right on a busy road. Went down to dinner and had a drink while we waited for our meal and chatted with the landlord; I had chicken with chorizo sauce and Jeff had steak and ale pie, and we swapped midway through. Both were delicious and then we had pavlova for dessert.

Went for a walk in the garden and then watched birds at the bird feeder--saw lots of goldfinches, which are a different bird from the American goldfinch. Not much yellow, but very striking and colorful.

Carlisle - we actually visited Carlisle before we started walking, and loved it. The castle was our first stop, and where we bought a 14-day international visitors pass for English Heritage sites.  Virtually all the places we are visiting and EH sites, so it was well worth the 64 pounds we paid for two passes. 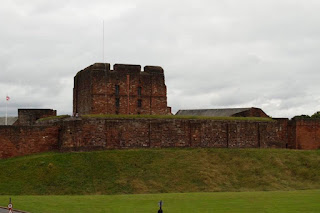 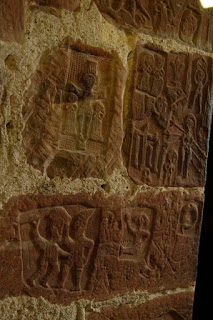 The photo above is doodles made by bored medieval guards.

Carlisle Castle is old and apparently one of the smaller castles. We were pretty jet lagged, but still enjoyed walking around, climbing spiral staircases, and remembering scenes from The Princess Bride were the Farm Boy and Inigo Montoya engage in sword fights while racing up and down the stairs.

We visited Carlisle Cathedral that evening (btw, the sun sets much later this far north--it was still-outside-and-read light at 10 pm) and had the place to ourselves. We still whispered. Regardless of your faith, I find most people whisper in sacred places.  It was absolutely lovely and peaceful and the best way to visit a place like this. They locked the doors after we left 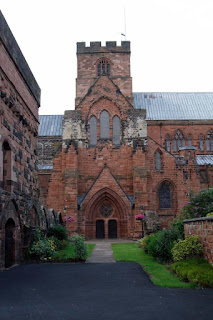 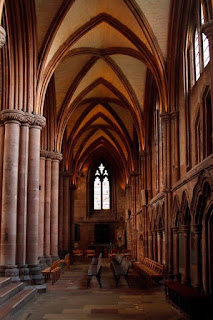 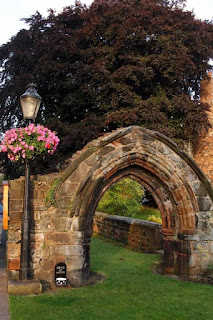 We visited Tullie House Museum the next day, and it was fabulous. The exhibition on the Roman Cavalry was superb and the docent talked with us for a good half hour, explaining everything. The exhibits, especially the dioramas, were exceptional. The main exhibit on Roman Britain was also superb--they had a standard Roman tent that housed 8 soldiers set up with all the kit available to examine.

Here's a Roman Cavalry Helmet - found by a detectorist! 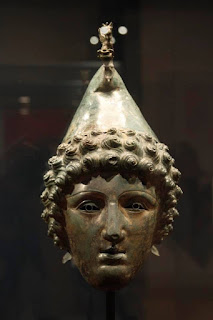 In addition to the castle, cathedral, and museum, we really enjoyed Carlisle. Nice pedestrian area in the city center with lots of shops and restaurants. We enjoyed The Shabby Scholar and The Dutch Uncle, which are affiliated, the best--good variety and easy to access.
at Thursday, July 13, 2017