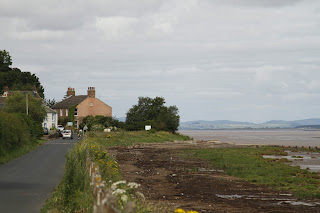 Stats:
Bowness on Solway to Beaumont

After months of planning and training, my husband Jeff and I are officially walking the Hadrian's Wall Path, west to east, from Bowness on Solway to Wallsend.

Bowness on Solway is a hamlet on the Solway Firth, and marks the western border between England and Scotland. Wallsend is a suburb of Newcastle, not quite on the North Sea and no longer on the border since the Romans preferred straight lines while the England/Scotland border angles up and to the right from Bowness on Solway to just above Berwick upon Tweed.

We flew into Manchester from Denver, via Newark, and then took the train to Carlisle through the Lake District.  We stayed the night in Carlisle, getting over jet lag and visiting the Castle, the Cathedral, and the Tullie House museum. Early in the planning stages, I had thought we would do this sightseeing when we walked through Carlisle as part of the Wall trek. So glad we opted to visit these wonderful places first instead as we didn't have time to sightsee in Carlisle at all when we passed through...more about that later.

We then took a cab (30 pounds) out to Bowness on Solway. Took a walk to the nature preserve and had dinner at the King's Arms. Jeff is sticking to local ales and tried the Cock-a-Hoop ale.  Janet is sticking to Chardonnay. Our B&B was Shore Gate House where we had a room on the top floor and looked out on the Firth and watched the tide come in. We spotted lots of new birds (for us!) including blackbirds, black-headed gulls, and curlews. 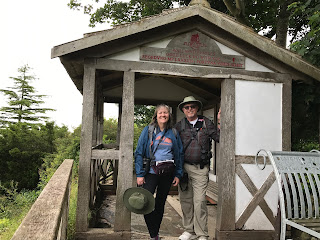 After a hearty breakfast we started walking, stamping our Hadrian's Wall passports at the start/finish hut and walking through town and down the road. Our pace was pretty slow because we birded along the way, seeing our first lapwings and a gray heron, as well as white egrets and cormorants, plus swallows (same as our barn swallow), house sparrows, and house martins (another new bird).

We also chatted with people on the trail--mostly locals out for a walk, and had our picture taken by Roger, who custom outfitted his signpost to include mileage to our village of Niwot, CO.  He was also fun to talk with--he is retired and we visited the Methodist church where his wife provides tea/coffee for hikers. 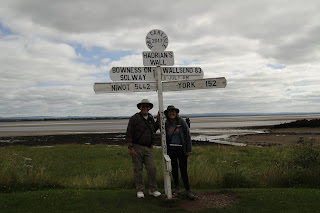 Rookie mistakes - we missed a turn and had to walk along the road instead of on top of the Vallum on our way to Glasson, but a nice lady in the Lock Smiths House pointed out the way. I discovered that half of my backpack's bottom strap clasp was missing, so we had to rig a way to fasten it.

We stopped for a short break at Drumbrugh and shortly after we got back on the road, we passed the Drumbrugh Castle, which was a bastion house during Reiving days. 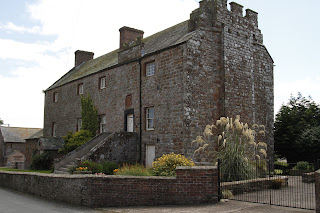 It was very pretty where we walked along a ridge overlooking the salt marsh where cows and sheep were grazing, and some were up on the trail, but scampered away as we approached.

Had a late lunch at the Greyhound Inn in Burgh by Sands--the barmaid served us even though we arrived after 2 pm. Had chicken, bacon, leek pie, with chips and mushy peas.

Stopped at St Michael's after lunch, which has been a church for over 700 years, built on the site of a Roman fort. It has a Pele tower and was used for defense during Reiver raids. Took a picture of Edward I's statue--he died there on July 7, 1307 on the Solway Firth, and was carried back to St. Michael's where he laid in state before being carried to London for burial.

Made our way across fields of sheep to Beaumont, where we had to ask a farm girl in a tractor directions to Roman Wall Lodges. In the course of our first day, the trail took many forms, but the most important thing was to look for the acorns marking the trail. 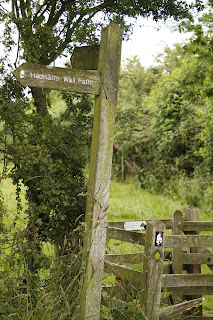 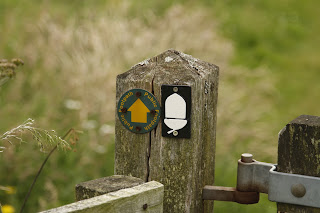 Took naps and showers and had tea in our rustic cabin before heading off to dinner at the Drovers Rest, where the steak was excellent and so necessary for restoring tired muscles.  Slept great, knowing we had completed the first leg of our trek.