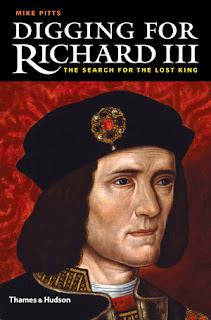 I am a Yorkist. In my garden, I prefer red roses to white ones, but when it comes to the War of the Roses, I wear a white rose. When I was in York in 2017, after finishing my Hadrian's Wall trek, I got a pair of white rose earrings in the York Minster gift shop and I wear them a couple of times a week.

So, when my sister gave me her copy of Digging for Richard III: The Search for the Lost King, by Mike Pitts, I dropped everything and read it. Of course, I already knew the story of how the Richard III Society, with Philippa Langley leading the charge, commissioned the University of Leicester to help them search for the grave of Richard. What I didn't know was that the archeologists at UofL were focused on excavating the Greyfriars friary church, which was demolished during the reign of Henry VIII, and that finding Richard's grave was considered the longest of long shots.

In addition to reading about RIII and the War of the Roses and the Tudor propaganda machine, I absolutely loved reading about how the archeologists approached their task, the techniques and methodology, the scholarship involved, and the practical, financial realities of a project like this. This book very much tells the story of the discovery of RIII's remains from the point of view of the archeology team rather than the RIII Society, which is fine because Philippa Langley's movie about the project does the opposite. It's good to hear both sides of a story like this.

Next trip to the UK will definitely include a stop in Leicester so that I can visit the King Richard III Visitor Centre and the Leicester Cathedral, where RIII was reburied in March, 2015. In the meantime, I will content myself with rereading Sharon Kay Penman's fabulous Sunne in Splendour and Josephine Tey's Daughter of Time. I may even rewatch The White Queen, but you won't catch me sitting through another production of Shakespeare's The Life and Death of Richard III. 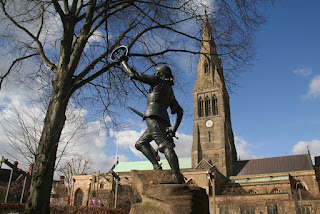