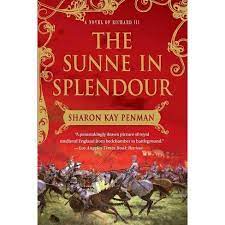 Way back in the Dark Ages when I was in college, I took an English history class in which we read and discussed To Prove a Villain: The Case of King Richard the Third.  Sadly, I lost this book in the great basement flood that stole most of my college textbooks, so I haven't reread it in years but I remember the revelation that propaganda wasn't a modern invention and victors rewrite history.


In 2010 I finally got around to reading Josephine Tey's marvelous detective story, The Daughter of Time, and at the end of 2012 slowly read Sharon Kay Penman's outstanding novel, The Sunne in Splendour. I read it slowly partly because I initially was following a read-a-long schedule from another blogger, and partly because I loved it so much that I wanted to stay in the fictional world Penman created and hang out with Dickon, Anne, Ned, and the rest of the characters for as long as possible.

The Sunne in Splendour tells the story of the War of the Roses, wherein the House of York and the House of Lancaster slaughter each other for thirty years, fighting for control of England (1455 to 1485, or Richard II to Richard III with Henrys IV, V, and VI and Edward IV and V in between).  There's no question that the world depicted in Sunne in Splendour is brutal, but the story told in the novel is warm and bright.

I consider The Sunne in Splendour to be one of the high water marks in historical fiction. Although the story flies in the face of the myth-made-fact "truths" about Richard III, as perpetuated by Sir Thomas More and Shakespeare in particular, I never found myself questioning the historical basis of the novel as I do with other lesser forms of the genre (e.g., sub in "Phillipa Gregory" here).  From the speech patterns to the clothes, food, armour, lodgings, daily rituals, and kingly accoutrements, the world and characters of Sunne in Splendour always feel right and whole and consistent. I'm no expert on Renaissance England, but I don't doubt that Penman gets it right, and as a lover of history as well as novels, this is important to me.

With regards to the story, there's so much to love--Richard as a young boy, idolizing his older brothers, championing his younger cousins, including Anne Neville, the girl who turns out to be his soulmate and helpmate, friend and lover.  I loved seeing him amongst his family, many of whom turned out to be difficult to love, but who earned his loyalty.

I can't really do justice to this wonderful novel--it's well-written, engaging, touching, and authentic.  A hearty thumbs up with a plan to reread before too long.  But first, I have to check some of Penman's other novels--she's too good not to become one of my favorites!