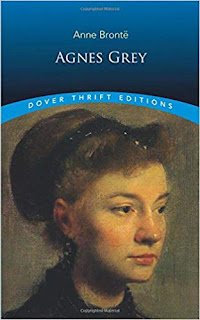 I know so many people absolutely love Anne Bronte and Agnes Grey in particular, but sadly I am not one of them. I am a fan of Victorian literature and have been reading Jane Eyre and Wuthering Heights for decades, but I was bored by Tenant of Wildfell Hall and annoyed by Agnes Grey.

Here is what I didn't like about Agnes Grey.

I found the first-person narrator to be sanctimonious and self-righteous without a spark of humor. I always assumed poor Agnes to be forced to become a governess, but this was entirely her choice. Yes, her father risked and lost their meager family funds and they were strapped financially, but her parents and sister repeatedly told her she needn't go off and be a governess since they could see she wasn't well-suited to it. But, she spent years miserable, lonely, and bitter about the thankless job. She was very snarky and judgmental about the children she was employed to teach and their parents, and I have to believe that she set herself up to be marginalized. I know I am not being fair, but the constant sniping by Agnes got on my nerves.

Anne Bronte didn't tell a very compelling story. The characters were either good or bad--that is, Agnes and her parents and sister and Mr. Weston, the curate she falls in love with, were all good, and the children and parents and their friends were uniformly bad. No shades of gray, no backstory to explain the manifold flaws of the gentry Agnes forced herself to work for, and definitely no growth. I was hopeful that Miss Rosalie would show some growth after she came back into Agnes's life as a married woman who regretted marrying for money alone, but no, she was still selfish and deceitful. And the main character showed absolutely no growth or development or enlightenment in the course of the story. She had no personal hills to climb, she had only to endure being around people she didn't like and who didn't like her.

So the plot was non-existent, the characters were cardboard, and the tone was supercilious. Why then did I give it three stars on GoodReads? Good question--I think I was swayed by the lovely description Bronte gave of the sea coast where Agnes and her mother go to live at the end of the book. I am always a sucker for good nature writing, and this stole my heart and made me want to return to the Yorkshire coast again.

Not the best classic to begin my Back to the Classics 2019 challenge, but now I have a check mark next to Classic by a Woman Author category.

Email ThisBlogThis!Share to TwitterShare to FacebookShare to Pinterest
Labels: Agnes Grey, Anne Bronte, Back to the Classics Challenge