I had meant to read So Big, the novel that won Edna Ferber the Pulitzer Prize, for the Back to the Classics challenge but while procuring a copy I got sidetracked (Squirrel!) by Giant and decided to read it instead. I knew I wanted to read something by Edna Ferber because I absolutely loved Showboat as a teen and read it a few times, and I think she is one of those forgotten 20th century authors who deserve a place in the pantheon. Not sure why she is rarely read anymore--her writing is strong, her stories and characters are strong, and she is thoughtful and insightful.

On to Giant. All I knew about Giant was that it was set in Texas and was made into an iconic movie starring Rock Hudson, Elizabeth Taylor, James Dean, who died before the film was finished and so his final speech was dubbed by another actor.

Okay, now really onto Giant. Leslie is a Virginia blueblood, attractive, smart, witty. Jordan (aka Bick Benedict) is a Texas rancher whose lineage goes back to the Alamo days, and Jett Rink is a surly cowhand on Bick's ranch who strikes oil. Leslie marries Jordan, and Jett falls in love with her. 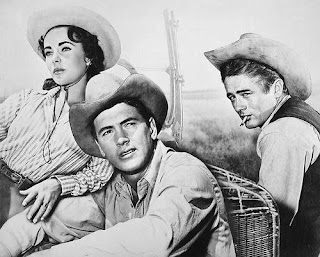 Leslie works hard to become a good Texas wife - she learns to live with the heat, the dust, the food, the socializing, the braggadocio, the family squabbles - and she succeeds. She manages her husband and wins friends and allies that take the edge off her homesickness for Virginia and the home and family she left behind.

The story spans the 1920s to the early 1950s - both world wars play incredibly minor roles in the story, but civil rights and racism do come to figure prominently. Giant is essentially a story about Texas as seen through the eyes of Leslie, the outsider.

Ferber has an interesting style in that she teeters on the edge of stream of consciousness by dropping commas and stringing together thoughts and things that would normally be punctuated. I found it effective and interesting.

I'm interested in finally watching the movie, but coming in at over three hours, I will probably have to wait until I retire to put together sufficient time to watch it!

And I still want to read So Big and Cimarron and maybe reread Showboat.