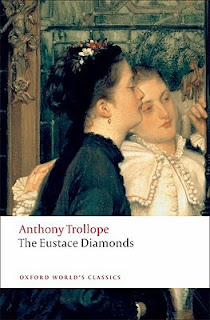 I really enjoyed most of The Eustace Diamonds, the 3rd book in Anthony Trollope's Palliser series, and was happy in the assumption that I was reading another 5-star Victorian novel, and then I got to the stereotypical anti-Semitic characters (Mr Benjamin, the jeweler, and Mr Emilius, the preacher) and my heart sank.

You cannot say that Trollope was simply a product of his times and forgive him. The Eustace Diamonds was published serially from July 1872 to February 1873, 35 years after Charles Dickens gave the world Fagin in Oliver Twist and was taken to task for that stereotypical character. Knowing that the Holocaust was but 50 years away and knowing how stereotypes were used in hate-driven propaganda drives home the point that words matter and novelists have responsibility and accountability for their words and stories.

Apart from this glaring problem, The Eustace Diamonds is a bit of a mashup of Thackeray's Vanity Fair and Phineas Finn, the Palliser novel just preceding this one. The narrator acknowledges that Lizzie Greystock is cut from the same anti-heroine cloth as Becky Sharp - like Becky, Lizzie is attractive, seductive, selfish, manipulative, and really amoral. Despite all this, I found myself rooting for her a bit because like the other anti-heroine Scarlett O'Hara from Gone With the Wind, she is a prisoner of society--she has to marry in order to have the protection of a man who can represent her interests. Even though she is pig-headed and willfully ignorant of the law, there is an undercurrent of feminism that I latched on to. But seriously, Lizzie is a hard character to sympathize with much less like.

For most of the novel, Lizzie manipulates and exploits the good nature of her cousin, Frank Greystock, whose story is remarkably similar to that of Phineas Finn. Both are sons of clergyman with parliamentary ambitions that their meagre incomes cannot support. Both are tempted to marry for money so that they can live up to their potential. Both are torn between the love and devotion of a poor but virtuous maiden and their own ambition. I was a bit surprised that Trollope would replumb this same story line again in the next book in the series.

The discussion of the ownership of the Eustace diamonds was interesting. Are they heirlooms that cannot be given away or can the current head of a family dispose of his property as he wants to? The novel feels like it is documenting some fairly major shifts in English society with regards to primogeniture, individual rights versus societal conventions, and upward mobility.

I found the story of the diamonds and the several attempts to steal them fascinating, with shades of the great caper stories that I love to read. Like I said, this should've been a 5-star novel. But, it's not.

This is my 19th century novel for the Back to the Classics Challenge - 2021.

Email ThisBlogThis!Share to TwitterShare to FacebookShare to Pinterest
Labels: Anthony Trollope, Back to the Classics Challenge, Eustace Diamonds