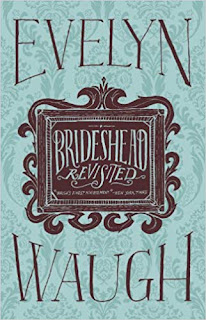 Brideshead Revisited, by Evelyn Waugh, is one of those books I thought I had read in my late teen years but having just finished it now I'm not sure whether I ever did read it or just thought I did.

At any rate, it was an excellent foray into the dark side of the Downtown Abbey world. Taking place in the years between WWI and WWII, the story recounts the cracking and fragmentation of a gentry family, which parallels the cracking and fragmentation of the British Empire and the established order. The narrator, Charles Ryder, encounters the family home of the Flyte family, Brideshead, in 1945 when the army has requisitioned the home for its own use and the novel is his reminiscences about his involvement with the family and his many visits to Brideshead when he was young.

Charles met Sebastian, a younger son and charming madcap, at Oxford, where they quickly became devoted friends. The novel was published in 1945, and so their sexual relationship is not spelled out but is strongly implied. Sebastian drinks to excess to escape the straitjacket of family life and the Catholicism that permeates the family, and over the course of the book retreats from family, friends, England, and the world into a permanent state of self-loathing and abnegation.

Later Charles has a relationship with Sebastian's sister Julia with whom he tries to fill the void that Sebastian has left in his life.

The whole novel is quite depressing, delving into a few of my least favorite subjects to read about: self-loathing, self-destruction, and adultery. That said, it is beautifully written, poignant, and a testament to the fact that the world I live in is more open and accepting of those who do not fit into the established grooves. Much as I love the clothes, I would never want to return to the world of Brideshead. 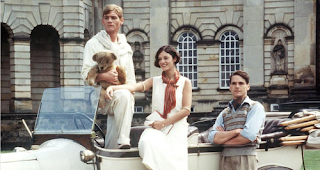