Uncle Tom's Cabin and the Battle for America: Mightier than the Sword 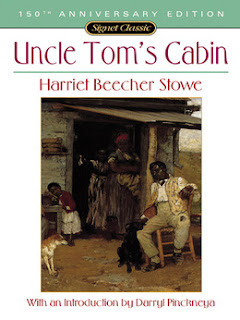 One hundred and fifty years ago, the United States was, in the words of Abraham Lincoln, "engaged in a great civil war." Acres of books have been written about the causes of the war, but I don't think there's really any question that Harriet Beecher Stowe's Uncle Tom's Cabin was a lightening rod that galvanized the foundering abolitionist movement, inflamed the South, and helped to bring the Republican Party into existence with an anti-slavery platform.

I have long wanted to read Uncle Tom's Cabin but have put it off because I assumed it would be anachronistic, embarrassing to read, poorly written, and dull. However, given that I am committed to giving the Civil War the attention it deserves over the next couple of years, I put it on my Classics Challenge list for 2012 and tackled it in July.  I couldn't have been more wrong about the novel--I read it in order to appreciate its historical place in American history and found that I admired it as a novel and Stowe as a novelist.

First of all, it is well-written.  I read a lot of Victorian novels, and it is definitely a product of its time, as is Gaskell's North and South, Dicken's Bleak House, Charlotte Bronte's Jane Eyre, and George Eliot's Middlemarch.  It's really a shame that its role in antebellum America as well as Reconstruction and beyond removed it from classics reading lists because it is a wonderful novel, full of interesting characters, exciting scenes, and a moral compass that is unrivaled by any of Stowe's contemporaries.

I was so surprised to find Tom so different from what I expected.  I grew up in a time when Malcolm X derided Dr. Martin Luther King as an "Uncle Tom" so I was blown away by the actual characterization of Tom who was strong and resilient and steadfast in his convictions--he refused his master's direct order to beat another slave with his eyes wide open.  I was also surprised by the evenness with which Stowe bestowed her good and bad characters between north and south.  I expected the North to be Good and the South to be Bad, but that was not the case at all.

My favorite character was St. Clare Augustine, father of the angelic Eva and Tom's second master during his descent into America's own heart of darkness.  St. Clare was a complex character--born into a slave-holding tradition but able to see slavery for the economic trap that it truly was and tormented by a spiritual sensitivity that prevented him from accepting the rationalizations for slavery that his Southern compatriots touted.

I was also surprised by the fact that there were two parallel stories--the Northern emancipation story in which Eliza and George Harris escape to Canada with their son, and the Southern bondage story in which Tom is sold south several times until he is finally beaten to death.  I had always thought of Uncle Tom's Cabin as providing one story, that of Tom, and his time at Simon Legree's plantation being the bulk of the story.  In fact, he only encounters Legree late in the novel. 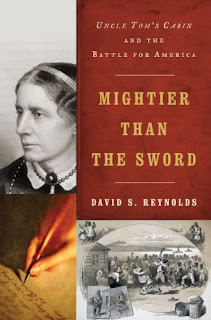 I followed up reading Uncle Tom's Cabin by reading David S. Reynold's Uncle Tom's Cabin and the Battle for America: Mightier than the Sword.  I am not exaggerating when I say that this is one of the most enjoyable, interesting books I have ever read.  It is a perfect combination of author biography, lit crit, and history--three genres which I absolutely adore.

Reynolds not only maps the role of the novel leading up to the war, but afterwards as well.  I thought I had a fairly decent handle on American cultural history but I had no idea of the pervasiveness of the "Tom" shows, that is, the play versions which swept the nation and the world for decades.  Countless Americans, including authors, artists, actors, politicians, saw one or more of the stage versions numerous times and there is no doubt of the effect it had on them and their work.  And not just Americans--notables worldwide read Uncle Tom's Cabin and considered it life-changing.

For Tolstoy, Uncle Tom's Cabin exemplified "the highest art"--greater even than Shakespeare--because it promoted "the brotherhood of God and man." For Lenin, Uncle Tom's Cabin was his favorite book in childhood, and he gave it a place of pride in his room.  He mentioned it often, once declaring that it provided "a charge to last a lifetime."

I came away feeling that Uncle Tom's Cabin is truly one of the most significant books ever written by an American author.   In fact, the phrase "the great American novel" was first applied to Stowe's novel and I can't help but agree that the label is justified.