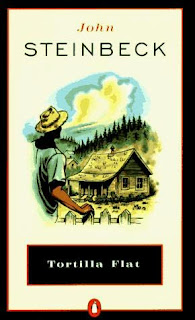 I am so glad that Katherine Cox of November’s Autumn picked literary movement as the theme for this month’s Classics Challenge because I honestly didn’t know what angle to take when blogging about my latest classic, John Steinbeck’s Tortilla Flat.

Like Joann at Lakesidemusing who commented on my Tweet about finishing Tortilla Flat, I have to rate it my least favorite Steinbeck. Unlike the bums of Cannery Row, the paisanos of Tortilla Flat don’t have a character such as Doc that I can relate to and whose regard for the bums convinces me that their stories have a connection to me. But I digress, this post is supposed to be about literary movement and where Steinbeck and Tortilla Flat fit.

Before doing any research, I had pegged Steinbeck in the realism camp, a natural heir to Dickens, Gaskell, and George Eliot. However, with a little Googling I learned that literary critics give him the natuaralism label. What’s the difference? Here’s what the Wikipedia post on the subject had to say:

Naturalism was a literary movement taking place from the 1880s to 1940s that used detailed realism to suggest that social conditions, heredity, and environment had inescapable force in shaping human character. It was depicted as a literary movement that seeks to replicate a believable everyday reality, as opposed to such movements as Romanticism or Surrealism, in which subjects may receive highly symbolic, idealistic, or even supernatural treatment. Naturalism is the outgrowth of literary realism, a prominent literary movement in mid-19th-century France and elsewhere. Naturalistic writers were influenced by Charles Darwin's theory of evolution. They believed that one's heredity and social environment largely determine one's character. Whereas realism seeks only to describe subjects as they really are, naturalism also attempts to determine "scientifically" the underlying forces (e.g. the environment or heredity) influencing the actions of its subjects. Naturalistic works often include uncouth or sordid subject matter; for example, Émile Zola's works had a frankness about sexuality along with a pervasive pessimism. Naturalistic works exposed the dark harshness of life, including poverty, racism, violence, prejudice, disease, corruption, prostitution, and filth. As a result, naturalistic writers were frequently criticized for focusing too much on human vice and misery.

Given that description, I can’t argue that Steinbeck is squarely in this movement.

The novel opens with basically a statement about naturalism in literature…

This is the story of Danny and of Danny’s friends and of Danny’s house. It is a story of how these three became one thing, so that in Tortilla Flat if you speak of Danny’s house you do not mean a structure of wood flaked with old whitewash, overgrown with an ancient untrimmed rose of Castile. No, when you speak of Danny’s house you are understood to mean a unit of which the parts are men, from which came sweetness and joy, philanthropy and, in the end, a mystic sorrow. For Danny’s house was not unlike the Round Table, and Danny’s friends were not unlike the knights of it. And this is the story of how that group came into being, of how it flourished and grew to be an organization beautiful and wise. This story deals with the adventuring of Danny’s friends, with the good they did, with their thoughts and their endeavors. In the end, this story tells how the talisman was lost and how the group disintegrated.

Danny and his friends are an organism, and Steinbeck in telling their story is a scientist studying the organism, the relationship between the elements of it and how they synthesize to become an entity and how they disintegrate into their pieces/parts when the bonds that hold them together disintegrate.

Tortilla Flat seems to be something of an experiment in that Steinbeck self-consciously wrote it within a philosophical construct, and in so doing I think he undermined any empathy a reader might feel for his characters. Although Tortilla Flat was Steinbeck’s first successful novel insofar as sales were concerned, he felt that readers misunderstood his paisanos (i.e., Steinbeck used the term to refer to people of mixed racial heritage, with a "..mixture of Spanish, Indian, Mexican and assorted Caucasian bloods.”

In a foreword to a later edition of the book, he wrote: "..it did not occur to me that paisanos were curious or quaint, dispossessed or underdoggish. They are people whom I know and like, people who merge successfully with their habitat...good people of laughter and kindness, of honest lusts and direct eyes. If I have done them harm by telling a few of their stories I am sorry. It will never happen again."

While Tortilla Flat is my least favorite Steinbeck so far, it still is an interesting little book and worth the designation of classic. In terms of literary type, it also overtly mimics Arthurian stories, and each chapter is an adventure in which the ragtag knights attempt to right wrongs, slay dragons, and live honorably within their organic code of conduct. As in the Arthurian stories, at the end Camelot disappears and the knights disperse when their leader joins the immortals.

I admire what Steinbeck was trying to do with this book—I’m glad I read it, and I was very glad when I finished it. I really do enjoy reading a favorite author’s early works to see how he/she developed as an author, and Tortilla Flat is worth reading if only to compare it to the much later Cannery Row as well as The Acts of King Arthur and His Noble Knights, which I have yet to read, but which was magnificently reviewed by Lucy Pollard-Gott here.

I'm toying with the idea of watching the movie, which actually gets pretty decent reviews on IMBD.  I may actually appreciate the book more once I watch the movie! 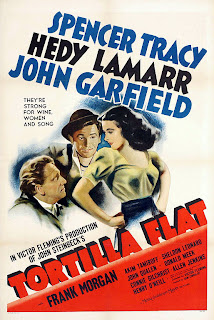