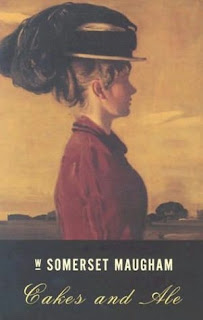 Cakes and Ale, by W. Somerset Maugham, is my first Maugham and has graced my tbr shelf for quite awhile now, but I was inspired to read it when I learned that a number of fellow book bloggers were reading it this summer.

Overall, I liked it and it held my interest, though it was a trifle odd in places. I do enjoy reading about writers, the process of writing and publication, truth in fiction, and the double-edged sword of the fame, acclaim, and success. Published in 1930, Cakes and Ale, or The Skeleton in the Closet, is reputed to be somewhat autobiographical, with its main author characters, Edward Driffield and Alroy Kear, being loosely based on Thomas Hardy and Hugh Walpole. The latter is best-selling author in the 1920s and 1930s, whose works have fallen in such neglect that I had to look him up on Wikipedia.

The real subject of the novel, however, is Driffield's first wife, Rosie, a low-brow, luscious sexpot who sleeps with any man she happens to like, and unabashedly indulges in "cakes and ale." Much as I enjoyed reading about Rosie and her influence on the life of the author, also a successful writer (based on Maugham himself), she never really felt real to me, which is a bit ironic because the plot of the novel is around Driffield's second wife wanting Alroy Kear to write a whitewashed version of Driffield's life after his death. The narrator, William Ashenden, who knew Driffield and Rosie when he was young, resists the whitewashing and the theme of the novel centers on the interplay and interdependence of truth and art.

There's a lot to think about here--which representation of Rosie is the most accurate: the woman as described by Ashenden as he writes what he remembers of his relationship with her years earlier, the woman painted by the artist who redefines her blousey barmaid style as ethereal beauty, Driffield's account of her philandering the night after the death of their daughter of meningitis, the good people of Blackstable who can't get over the fact that she was a barmaid, Driffield's second wife who forever sees her as a threat that must be denied, or the photographs that show her to be prosaic.

The same multi-faceted, refracted set of images is provided for Driffield as well. As Ashenden says near the end of the book when he is looking at photos of Driffield that were taken when he was a young man:

The face you saw was a mask and the actions he performed without significance. I had an impression that the real man, to his death unknown and lonely, was a wraith that went a silent way unseen between the writer of his books and the fellow who led his life, and smiled with ironical detachment at the two puppets that the world took for Edward Driffield.

The difference between Rosie and Driffield comes down to the fact that he is a writer and she is not. Both are unknowable--everyone is essentially unknowable--but Driffield can free himself through his expression of truth as he sees it in his art. After expounding on the limitations and pitfalls of being a writer, Ashenden says, with regards to a writer:

But he has one compensation. Whenever he has anything on his mind, whether it be a harassing reflection, grief at the death of a friend, unrequited love, wounded pride, anger at the treachery of someone to whom he has shown kindness...he has only to put it down in black and white, using it as the theme of a story...to forget all about it. He is the only free man.

Again, the irony of this is that after he is dead, his second wife and fellow writers conspire to stuff him back in the box labeled "Edward Driffield, writer," and any truth about who he really was dies with him.
at Wednesday, July 06, 2011