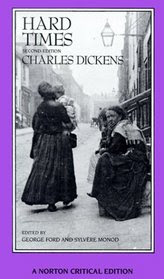 A few years ago, along with countless other readers I fell in love with Elizabeth Gaskell's North and South after discovering it first through the BBC mini-series. Reading N&S prompted me to read more of Gaskell and I spent about a year reading her front-to-back while I read the wonderful Jenny Uglow bio of her. In the bio, I learned about what a patronizing rat Charles Dickens was to Gaskell, how he upstaged her N&S with his own Hard Times, and how he blamed N&S for the decline in readership of his periodical Household Words.

This is my way of saying that I read Hard Times with an agenda. This Classics Circuit tour may be an Austen vs. Dickens throw-down, but for me it is a Dickens vs. Gaskell Main Event, with Hard Times going head-to-head with N&S.

Suffice it to say that Hard Times is one of the weakest Victorian novels I've ever read. My personal vendetta aside, I just didn't like it. I found the first half of the book to be a series of character sketches--well, actually caricatures--and the second half to be a fairly interesting, but conventional short story. I like good writing, writing that takes my breath away and makes me sit up straight and see things in a new and clearer way. I didn't find that in Hard Times--it felt slick and jaded and calculating.

After I finished Hard Times, I did a bit of reading about where Dickens was in his life and career when he wrote the book and the response to it by critics since its publication. This actually turned out to be a more interesting project than reading the book itself, which really was a slog-fest.

I found an absolutely wonderful Norton Critical Edition of the novel that also had a terrific section called Backgrounds, Sources, and Contempory Reactions.

Hard Times was the tenth novel by Dickens, written between January and August 1854, when he was 42 years old. Chronologically, it comes after Bleak House and before A Tale of Two Cities. It was written for serial publication in Dickens' periodical Household Words, and its full title is Hard Times - For These Times.

It was written while Dickens was still living with his wife, albeit unhappily, and before he met his mistress, Ellen Ternan. As such, it reflects a bitter, discouraged, tired outlook and in my view is little more than propaganda for a position that it's not clear that Dickens completely supported.

The novel takes place in Coketown, a northern industrial town based on Preston, which was the scene of a prolonged strike by loom-workers. Dickens visited the town very briefly, attended one meeting of the workers and listened to part of one speech by a labour organizer. Based on this thin research, he wrote a story in which he satirizes Utilitarianism and political economy using characters that are one-dimensional. I found Hard Times to be little more than a morality play and not a good one at that. The good are very good and are rewarded for their virtues, the bad are very bad and are punished for their vices.

Despite John Ruskin's assertion that Hard Times was Dickens' best novel, most contemporary critics found much to dislike and it wasn't until the late twentieth century that many fans of the book appeared. It seems that currently the novel is held in high regard by the academic world, but the pieces I read in the Norton Critical Edition failed to sway me into liking it, especially when I compare it to Gaskell's N&S.

What I love about N&S is that there are no clear-cut good people versus bad people, with perhaps the sole exception of Fanny Thornton, and this cuts across class. Margaret Hale is a dutiful daughter with a large heart but prejudiced and, at times, arrogant; John Thornton is a harsh master with an open mind and compassionate nature; Mrs. Thornton is fiercely loyal and stern with deep maternal affection and pride, and so it goes. These are people, real people with real qualities trying to make their way as best they can in a world that can be confusing and frightening.

In Hard Times, the people in charge (i.e., the mill owners, the labour leaders, the politicians, etc.) are bad people--they are narrow, peevish, and self-serving, as reflected in their names...Mr. Bounderby, Mr. Gradgrind, Mr M'Choakumchild, Mrs. Sparsit, Mr. Slackbridge. The poor and the vulnerable are good people--Old Stephen, Mrs. Pegler, Rachael, Sissy Jupe, and the circus performers. These aren't real people, they're stock characters who don't sound or act like real people but give speeches and utter platitudes.

The world of Hard Times almost seems Suessical--the education system that Dickens lampoons (i.e., based entirely on the teaching of facts) is so prepousterous that it can't be taken as a serious threat. Jane Sinnett wrote an anonymous review of Hard Times in the Westminster Review in October 1854 in which she says of the education system described in Hard Times "we are not aware of such a system being in operation anywhere in England." Perhaps I am simply not a fan of satire, and Hard Times is nothing if not satirical.

One of the things I like best about Elizabeth Gaskell is that she felt that she had been given a gift (i.e., her ability to tell a good story), and she tried to use it to make the world a better place. Why then do I have such a problem with Dickens trying to do the same thing? I think it comes down to intent.

Dickens wanted to move from being perceived as merely a popular novelist to serious social reformer, and the result is that Hard Times reads like a political tract. Gaskell, on the other hand, was motivated by the desire to tell both sides of a story so that each could find common ground with the other. It's a common adage that writers do best when they write what they know. Dickens didn't take the time to know the people of the northern industrial towns, neither the masters nor the hands, and so Hard Times, his story about them, rings false regardless of the wit, energy, and skill that he brings to it.

In the end, it seems self-serving to me. Even his most sympathetic character, Stephen Blackpool, seems little more than a mouthpiece for Dickens' increasing discontent with the married state and his ardent desire to rid himself of his wife. Here's an image showing Blackpool's reaction to the return of his wife, whom Dickens blessed with the most vile attributes. I can just imagine Mr. Knightley saying, "Badly done, Charles, badly done."