The Angle of Repose 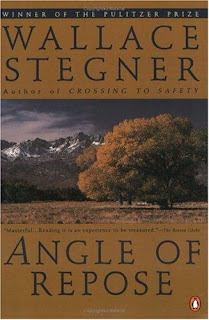 For years now, Wallace Stegner has been recommended to me and in particular his Pulitizer-Prize winning novel from 1972, Angle of Repose. For some reason, I always put off reading Stegner and this novel, though I'm not sure why--it had the aura of being a "difficult" book and I was never in the mood.

Then, I started building up Audible.com credits and saw it whilst browsing and sprang for it, and loved it! I do tend to gush a lot about good books when I've just finished them, so ask me in six months what I think...but today, I consider this among the best books I've ever read.

The book is a first-person narrative by the main character, Lyman Ward. Ward, confined to a wheelchair, is a middle-aged historian who is writing the biography of his grandmother, Susan Burling Ward, an artist/writer who went west as a bride in the 1870s. Stegner used the real letters of Mary Hallock Foote as the basis of the life of Susan Ward, and he quotes them within the novel itself.

I loved the way Stegner created two parallel stories, that of Lyman Ward and his immediate family and that of his grandmother and her friends and family. Together these two stories provide the story of a family as well as a perspective on the American frontier experience, which is determined by space, work, economy, politics, dreams, water and the lack of it.

In my previous post, I blogged about The Wilder Life and The Little House books by Laura Ingalls Wilder and I mentioned that I felt like I had taken a Little House reading challenge. Well, that thought persists because I thought of Laura and Almanzo Wilder a lot while I listened to this book. The story of Susan Burling Ward is really the story of her marriage and her life as a frontier/mining wife who faces hardship after hardship, disappointment after disappointment as her husband struggles to make a living in a rough, competitive world without compromising his integrity.

For me, the hero of the book is Susan's husband, Oliver Ward--stalwart, intelligent, gifted, stoic--and at times I felt so frustrated with Susan for not seeing him for the hero he was. I can imagine him saying, as Alamanzo Wilder did, that his life was a string of disappointments. The LH books present a warm, rosy view of pioneer life. Angle of Repose paints a much harsher, more realistic picture.

I found Lyman Ward's voice to be compelling, unique, and powerful as he dug away at the layers of dust over his grandmother's life and in so doing revealed the story of his own.

I thought a lot about the metaphor angle of repose while I was reading the book--it basically is the slope at which dirt stops sliding downhill and stays put. When I Googled it, I saw images of mounds of dirt, but when I was reading the book I kept on thinking about Oliver Ward digging trenches...first as a mining engineer, then as an irrigation engineer, and the dirt kept on falling back into the trench, making his work that much harder. Finally, he found a way to work without having the dirt back fall on top of him.

So often when I read a book that I really like, it opens up new areas for me to explore. Now, I'm eager to read Mary Hallock Foote's memoir, A Victorian Gentlewoman in the Far West, which contains the complete letters that Stegner drew from.

Here's an example of one of the drawings she created to illustrate her stories and travel pieces on life on the frontier. 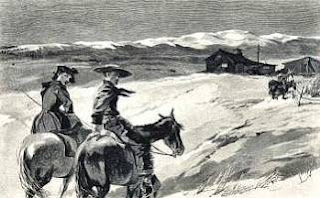