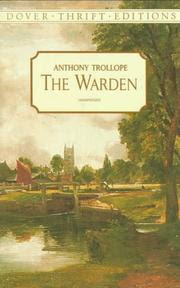 Anthony Trollope is one of those novelists whose works have been recommended to me countless times because...

1) He is a Victorian novelist and I love Victorian novels.
2) His novels have been described as not unlike those of Austen and George Eliot, both of whom I love.
3) It seems I will not be satisfied until I have read the COMPLETE canon.

These reasons notwithstanding, somehow I never got around to Trollope until now. Thank goodness The Classics Circuit decided to feature Trollope this month. I happily signed up to read and review The Warden, the first of Trollope's Barset Novels, described on my book jacket's inside flap as a "panoramic, six-volume portrayal of the professional and landed classes of Victorian England" that "follow the intrigues of ambition and love in the cathedral town of Barchester."

Here is the plot in a nutshell. Mr. Harding is the warden of a charity hospital, the funds of which were bequeathed in the will of a man who died hundreds of years earlier. The will stipulated how much money was to go to each of the indigent men who made their home in the institution, with the remainder going to the warden himself. This meant that as the amount of the legacy increased over time as property values increased, the paupers' stipend remained the same while the warden's income increased.

Mr. Harding is a very good man who takes his job seriously as the warden of the hospital and caretaker of the indigent men in his care. He visits them, ensures they are comforted in sickness and supported as they await death in their old age. Mr. Harding has two daughters, the younger, Eleanor, is unmarried and cut from Victorian heroine cloth--sweet, amiable, pretty, generous, and devoted to her father. She also happens to be in love a fiery, well-intentioned reformer, John Bold, who takes it into his head to do something noble and hits on the idea of championing the paupers and petitions the court to increase the paupers' allotment and diminish that of the warden.

The newspapers recognize a good story when they hear of this move, and in no time at all Mr. Harding is being painted in the press as a grasping, lazy cleric who is cheating the men in his care of their rightful allotment. Mr. Harding is horrified by the mud-slinging and decides to resign his post, even though this means he and Eleanor will go from having an income of eight hundred pounds a year to only eighty, and will have to move from their comfortable house to a very small cottage in a neighboring village.

All of Mr. Harding's friends and relations, except Eleanor, urge him to stay in his post and fight back for his good name and position. Eleanor pleads with her beau, John Bold, to cease and desist campaigning against her father, although she believes that in so doing she is cutting herself off from her one true love forever.

The basic story of The Warden is just the kind of plot that I like, full of moral dilemmas and a narrator who can make me see both sides of an argument so that I can cheer for Mr. Harding as he grows a spine but also undersand and support the rationale behind John Bold's campaign. The reason I love to read novels like this is because there really is no one right answer to most of life's tough issues. Trollope in this novel, like Elizabeth Gaskell in so many of her stories, does a wonderful job of showing the many contradictory facets of a social issue.

Where the novel lost me a bit was when Trollope droned on about church politics--perhaps to his original readers this was good stuff, but I found myself skimming it to get back to the plot. The narrator was also a bit on the precious side--a bit like Austen in that he often made softly snide observations about his characters' human foibles, but too soft to be either as funny or wise as Austen.

I read the introduction to my edition after I read the novel and learned that Trollope based the story on real incidents in which age-old sinecures were challenged and the holders of the offices castigated in the press. I liked that and had a fun moment imagining Trollope recognizing the novelistic possibilities of the situation, not only for the good man holding the office, but the good man driving him out of it, and the good woman they both love.

Even the villain of the story, Dr. Grantley, Mr. Harding's son-in-law and boss (i.e., he's higher up in the church and was responsible for getting Mr. Harding the post in the first place) is not really rotten, just awfully conservative!

I'm intrigued enough by this first foray into Trollope and his Barset Novels to want to read the next in the series, Barchester Towers.

I hope you find time to visit other bloggers on the Trollope Tour on the Classics Circuit. The schedule for the tour can be found here. My thanks to Rebecca, et al at the Classics Circuit for organizing this tour--once again I have found another author I like well enough to read more of. On with the canon!

Also, here is a link to the Trollope Society page on the Barset Novels.
at Sunday, December 12, 2010

Email ThisBlogThis!Share to TwitterShare to FacebookShare to Pinterest
Labels: Anthony Trollope, The Warden