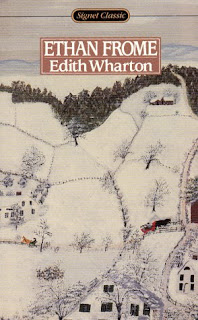 So says Mrs. Hale, the source of the few facts of the story that the narrator concocts about Ethan Frome, and so say I.

I first read Ethan Frome, by Edith Wharton, during the last millennium and, along with millions of other high-school students, remember it for the depression into which it flung me as I faced page after page of unrelenting misery that Wharton inflicted upon her title character. I probably callously thought then what I callously thought on my latest reread of this American classic, "Ethan Frome couldn't even succeed at killing himself and his lover as she asked him to."

Callousness aside, I have spent the last six weeks scratching my head trying to figure out why I would sign up to review Ethan Frome for the Classics Circuit's Edith Wharton tour when I had no good memories of reading this book and whenever I mentioned to someone what I was reading they invariably moaned and rolled their eyes and questioned my sanity. But, it is an American classic and I couldn't really remember how the story worked and I've matured a lot since I was 16, so after having a jolly good time with Murder at Longbourn I dived into Ethan Frome last week, and I'm glad I did.

It is beautifully written--exquisite prose, finely crafted, and a true expression of an American tragedy. It is compelling too. I found myself thinking of Hamlet a lot whilst reading it, and I forced myself to slow down and not chug it but to savor it and think about and feel the unfolding inevitability of the catastrophe.

I've also been slowly reading Nick Hornby's The Polysyllabic Spree, and in it he says that "some books are badly written...sometimes they're badly read, too." Ethan Frome is beautifully written but more often than not it's badly read, hence the almost universal loathing it inspires. I think it's a mistake to inhale it--though I think many people, especially students who must read it for a class, are tempted to because it's short (i.e., inhalable) and depressing (i.e., "let's just get it over with!")--because it does have a lot to like.

I found that I enjoyed reading this book when I limited the experience to just three or four chapters a night--and they are short chapters--and then turning to another book for balance. I read Shakespeare, especially the tragedies, this way too.

In thinking about what to write about for this post, I googled on "tragedy" and liked this opening sentence from the Wikipedia entry:

Tragedy is a form of art based on human suffering that paradoxically offers its audience pleasure...

I think our society tends to shy away from stories that don't have happy endings. I imagine Hollywood types discussing the "box-office poison" of tragedy--maybe that's why reality-show contests are so popular. In addition to being cheaper to produce than regular dramas, they do guarantee a happy ending for at least someone or some team. A tragedy is a guarantee that that there is no happy ending--the art lies in telling the story in a way that makes it pleasurable for the reader.

In the case of Ethan Frome, it is not the message but the medium that makes the story a classic. It is not that Wharton shows the dark underbelly of the American dream--although I thought it was interesting that Ethan thought of "going west" as a way of escaping the prison of his life in Starkfield--but that you can read this horrific tale of thwarted dreams and forbidden desire and appreciate and enjoy the beautifully wrought story arc, the layered, interwoven imagery of light and incarceration, and the metaphor of the seasons, from the dead mid-winter of discontent to the remembered heat of August to the false spring that ends the story.

I couldn't help wonder where Wharton's head was when she wrote this story--it was published in 1911, she divorced 1913. I found this on womenwriters.net: "Wharton was divorced from her husband in 1913, in part because she and her husband had grown into separate lives, and in part because her husband had numerous infidelities." Two years after she thwarted Ethan's escape from the shackles of his marriage, she affected her own escape.

A few years ago I listened to a series of lectures from The Teaching Company that were delivered by Elizabeth Vandiver, and I remember her saying that punishments in Greek mythology were particularly appropriate to the crime. I have to say that Wharton provided Ethan with a particularly appropriate punishment to his crime of lusting after his wife's cousin by having her become as querulous as his wife. Of course to be fair, Mattie did sustain a spinal injury which might excuse a certain amount of peevishness on her part over a twenty-year period.

In my opening paragraph, I mentioned that the narrator concocts the story of Ethan Frome from the few facts he gets from the inhabitants of Starkfield about Ethan. I read Atonement about six months ago and wrote a bit about the unreliability of narrators, Briony in particular, and how the story of Celia and Robbie is really more about Briony than Celia and Robbie. I got to thinking about Atonement again whilst thinking about Ethan Frome because it struck me that the story of Ethan Frome is more about the unnamed narrator who fills in the huge gaps between the facts with his own fantasy than it is about Ethan and Mattie and Zenobia.

In doing a bit of reading about Ethan Frome, I have discovered that Wharton wrote a companion piece to it, Summer. Since I read Ethan Frome in January, maybe I'll put Summer on my list for July. 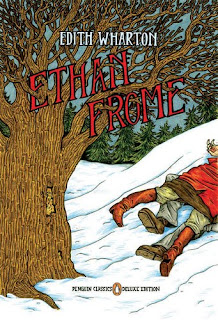 In looking for an image of the version that I read, I found quite a few versions out there...most have similar covers--the one on the Signet Classic version I read is a Grandma Moses painting, but I thought this one was the most out of the norm! Kind of gives away the whole story on the cover.


There's also a fairly recent movie adaptation with Liam Neeson as Ethan. Not sure whether I'll watch it or not. 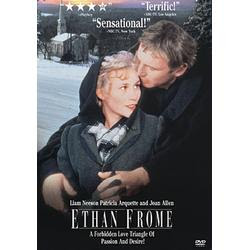