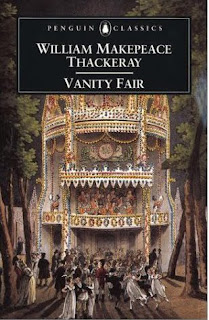 Ah! Vanitas Vanitatum! which of us is happy in this world? Which of us has his desire? or, having it, is satisfied?--come, children, let us shut up the box and the puppets, for our play is played out.

I finished this 1847 masterpiece today and now am motivated to read about the book. I listened to an audio version, and so promptly pulled my paperback copy off my shelf and read the introduction and learned that Thackeray had illustrated it himself. The drawings are simply marvelous and I had completely forgotten about them.

Here's a particularly good one from the collection at the Victorian Web, which was scanned by Gerald Ajam, with the caption by Tiaw Kay Siang and Sabrina Lim. 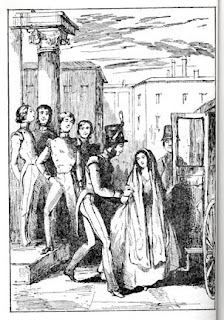 I also learned that Thackeray's handwritten manuscript of Vanity Fair is owned by the Morgan Library in New York City...yes, the same one that is now offering the Jane Austen exhibition. Since I am Twitter friends with the Morgan, I asked whether Vanity Fair is currently on display. I am planning to visit the Austen exhibit later this month and thought I might get to see Vanity Fair as well. Alas, no, the tweet came back, it is not on display at this time. That would have just been too serendipitous.

Now on to the thoughts...be forewarned, here lurk spoilers for both VF and Gone With the Wind.

Vanity Fair may be subtitled A Novel Without a Hero, but no one disputes the fact that Becky Sharp is the main character by sheer force of personality, despite being out of the action for chapters on end while the other characters' stories are told. As I was listening to the VF, I kept on thinking how much like Scarlett O'Hara Becky is, from her green eyes to her charm and wiles and single-minded ruthlessness to her relationship with Melanie/Amelia to her relationship to Rawdon Crawley. I figured I couldn't be alone in this observation, so I Googled and discovered that Margaret Mitchell vehemently denied having modeled Scarlett on Becky and denied having even read Vanity Fair before writing Gone With the Wind. Methinks she doth protest too much. Back in the day when I was GWTW obsessed, I read a bio of Mitchell and I recall the impression that she was defensive about a lot of things. I probably read about the Becky/Scarlett brouhaha then and just forgot about it until now.

However, I did find some other connections between VF and GWTW, some more significant than others.

Both contain the idiom that someone "wouldn't say boo to a goose" several times. I remember thinking when I read that phrase in GWTW how odd it was--not an expression that I've ever heard anyone actually use--so it jumped off the page when I encountered it twice in VF. If Becky had said "God's nightgown!" there would have been no question from whence Mitchell got that expression of Scarlett's.

I also thought it was really interesting how Dobbin ultimately left Amelia, saying that his constant devotion, unrequited for so long, had finally burned out his love for her and that he wasn't willing to hang around anymore. This is precisely what Rhett Butler tells Scarlett when he leaves her after Melanie dies. Of course, we get to see Dobbin return to Amelia's side, and GWTW ends with Rhett walking out on Scarlett, but the parallel is there. 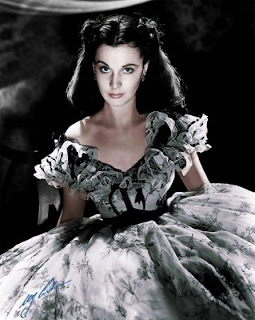 Further, Becky seeks to marry Amelia's brother, Jos Sedley, and definitely makes him infatuated with her and ultimately ruins him. Scarlett charms the socks off Melanie's brother, Charles Hamilton, and marries him, though he dies of illness at the start of the Civil War before she can make his life a living hell.

The one critical area that is missing from the Scarlett-is-Becky scenario is that of the "long-suffering" Ashley Wilkes. There is no parallel in VF for this part of the GWTW story. We never see Becky in love, ever. In this regard, she brings to mind someone who might be her model, Austen's Lady Susan. I know Thackeray read Austen's novels. I wonder whether he read this epistolary novella as well. Got to look up when it finally made it to print.

I also thought a lot about the narrator. Considering a couple of other masterpieces also published in 1847, namely Wuthering Heights and Jane Eyre, I was very aware of how dated Thackeray's obtrusive narrator felt. More like a Fielding narrator, than a Bronte first-person, framed story narrator who is striving for realism, Thackeray's narrator continually reminds the reader that this a is made-up story with dolls and puppets enacting the morality play, except near the end when he inserts himself into the story by saying he was at a dinner party where he heard Becky's and Amelia's histories recounted. I sort of wish he hadn't done that, actually. I liked him better as puppeteer.

I blush to say that I learned more about the Battle of Waterloo from reading this book than I ever learned in school and I'm eager to find out what Brussels was really like on the eve of the battle. Anyone have a book to recommend?

Richard Gilmore from the TV show The Gilmore Girls once quoted someone who said that all great books should be read at least three times. I'm happy to have at least one more reading of Vanity Fair in my future. 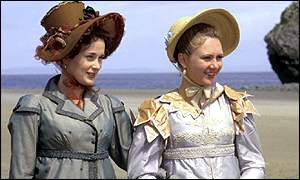