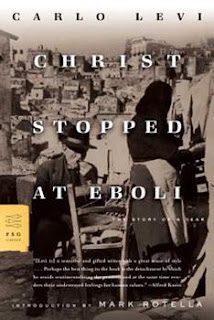 Every year I try to read at least one book by an Italian author to help me better understand the country and its history. I love to visit Italy, and I think this enriches those visits.

This year I chose Christ Stopped at Eboli, by Carlo Levi, on the recommendation of my friend, Maxene. The good news is that it was written in 1947 and so qualifies for the 2021 Back to the Classics challenge, and I'm putting it in the Classic by a New-to-You Author.

This is a non-fiction account of the year that the author spent in exile in the southern most region of Italy. Levi was a painter from Turin whose political activities in the 1930s earned him the wrath of the fascists who were coming to power in Italy during that time, and the punishment for these activities was banishment to a remote and rural village in mountaneous Lucania, now known as Basilicata. I think this is equivalent to the Soviets sending Alexander Solzhenitsyn to Siberia.

The title of the book comes from a saying that means that the civilizing affects of Christianity didn't make it to the southern most region of Italy--in other words, Christ and Christianity didn't affect the region of Italy south of the town of Eboli. The world in which Levi lived for a year was one of abject poverty, where the people were not only treated as feudal serfs but they saw themselves as almost less than human. Despite no money, no jobs, no industry, and farming that failed year after year because the crops were inappropriate for the landscape, the tax burden was never lifted and the people had to slaughter their precious goats, depriving their families of much needed milk, to pay their taxes.

Levi was not only a painter but had some medical training and the village adopted him as their doctor. But, of course, Kavkaesque bureacracy got in the way and he was forced to stop treating the villagers. At one point, Levi created a plan to combat the ever-present malaria, but this too was quashed. Punishing Levi by further restricting his activities was more important than promoting the health and well-being of the residents of this region.

While many parts of the book and Levi's experiences were tough to read about, the writing as translated by Frances Frenaye was exquisite, and I really did enjoy reading about the various villagers and how Levi became a part of their lives and he became a part of theirs. At the end, when Levi is granted amnesty along with other political exiles, the villagers beg him not to leave but to stay and marry the village beauty because if he leaves he will never return.

This was an exceptioinally good book. It not only gave me perspective on the conditions in Italy between the world wars, but it also demonstrates in very real terms why so many people from this region immigrated to the US and Canada.

There is a film version from 1979 that received a BAFTA in 1983. I always say that I am going to watch the film version of books I enjoy, but maybe this time I really will! 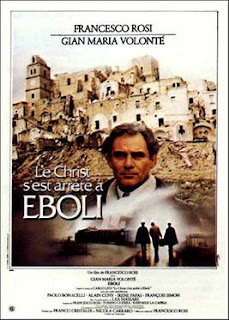