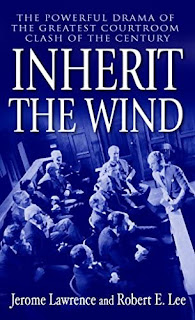 For the Back to the Classics 2021 challenge, for the Play category I decided to pick something from the 20th century and settled on Inherit the Wind, by Jerome Lawrence and Robert E. Lee, which premiered in 1955.

The play is a fictionalized version of the famous Scopes Monkey Trial (aka The State of Tennessee v. John Thomas Scopes), which took place in 1925. John Scopes was charged with teaching evolution in his high school science class, which was illegal in Tennessee at the time. The prosecution was led by William Jennings Bryan (3-time presidential candidate and a big voice in the early 20th century), and the defense was led by Clarence Darrow, a prominent lawyer who embraced controversial cases.

In their notes on the play, the authors point out that the play "does not pretend to be journalism. It is theatre. It is not 1925. The stage directions set the time as 'Not too long ago.' It might have been yesterday. It could be tomorrow."

I would add to that...it could be today.

They have changed all the names of the characters, slightly. With Matthew Harrison Brady in the role of Bryan, Henry Drummond as Darrow, Bertram Cates as Scopes, and E.K. Hornbeck as H.L. Menken, who covered the trial for the Baltimore Sun. There is a love interest, a bombastic preacher, sniveling local politicians, and kids in the crowd.

After reading the play, I'm interested in reading about the real trial -- I know the bare facts, Scopes was found guilty and fined $100, which he never paid.

The play basically portrays Brady (and by extension, Bryan) as a charlatan--a big man in love with himself and the sound of his voice, a politician and orator who needs his ego to be constantly fed, who is loathe to share the stage with anyone, and who adopts causes that he thinks will appeal to the "common people."  Drummond/Darrow, on the other hand, is portrayed as more complex. While he fights fiercely to demonstrate how the law that Cates/Scopes violated was a bad law (outlawing the teaching of evolution), in the end he shows himself to be a religious man. He is able to separate his personal beliefs from his understanding of his job as a lawyer. Brady, on the other hand, exploits the prejudices of the "common man," assuming a mantle of piety that hides his driving force of self-interest. Finally, Hornbeck/Mencken is portrayed as an opportunistic cynic who gets his comeuppance. I have no respect for Mencken, so this made me smile.

There is no question that Drummond is the hero of the play, and that the political climate of the 1950s (reactionary, McCarthyism) helped inspired the playrights in the same way it motivated Arthur Miller in his play, The Crucible.

The first movie version of the play starred Spencer Tracy as Drummond and Frederic March as Brady. I still haven't seen it and really want to find the time as it is a seminal movie. There have been three other film versions, and it looks like a number of very successful recent productions. I would love to see it on the stage. 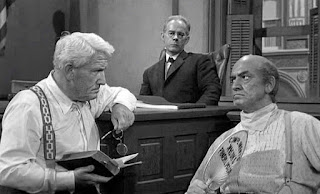 The play's title is from Proverbs 11:29: "He that troubleth his own house shall inherit the wind: and the fool shall be servant to the wise of heart."

There is a lot to think about in the play, especially in light of the recent war on science and the very real consequences when individuals and communities opt for prayer over masks and vaccines.

I would also like to read The Night Thoreau Spent in Jail, another collaboration by this writing team.

Email ThisBlogThis!Share to TwitterShare to FacebookShare to Pinterest
Labels: Back to the Classics Challenge, Inherit the Wind, Jerome Lawrence, Robert E Lee