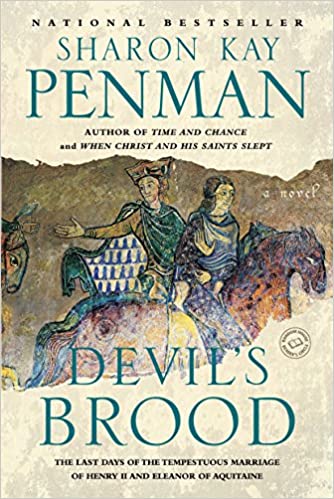 I love Sharon Kay Penman's historical novels, but they are long and so I usually can only fit in one a year. However, it's been since January 2017 since I've indulged so it was a real treat to dive into The Devil's Brood, referring to the warring, scheming, selfish sons of Henry II and Eleanor of Aquitaine. As Henry muses at one point, everyone wants a son and heir but daughters are much easier!

During most of the novel, Eleanor is Henry's prisoner, which is pretty horrible in and of itself, but she did betray him and plotted with her sons against him and while Henry was able to forgive them, he could never forgive her. For only a few years was she in discomfort, but her real misery (apart from freedom to travel and reign) was that she was kept in rainy, dismal England and was so homesick for lovely, warm, sun-splashed south of France.

Having visited Normandy, Brittany, and Paris in 2018, I felt so much more comfortable with the geography of the book than when I read Time and Chance, which chronicles the early years of HII and Eleanor's marriage -- up to when Becket was murdered in the cathedral. And most of this book does take place in France rather than England. I actually did visit some of the places mentioned--Mont St Michel, Rouen, Rennes, Bayeaux, Caen, and, of course, Paris.

Penman did a particularly good job of bringing into focus Hal, the Young King, the oldest son to survive into adulthood and whom HII foolishly crowned, so there were actually two Kings of England at one time. Why he thought this would make for a happy home life remains a mystery! Hal reminded me so much of Shakespeare's Prince Hal before he became Henry V.

I also enjoyed reading about Geoffrey -- the son after Richard and before John. He was the Duke of Brittany, and actually seems the most able ruler of all the sons. He wasn't necessarily a nice guy, but he was smart and capable.

Both Richard and John almost seemed a bit cardboard compared to the richness in character Penman gave to Hal and Geoffrey. But then, Richard is center stage for the next two books in the series so I think I'll get to know him pretty well in time.

Clocking in at 730 pages, I felt like one of the family, with ample time to get to know all the main characters as well as the extensive cast of servants, knights, confidants, and relatives. Yes, this book is chock full of history and details about life in Medieval Europe, but at its heart it is the story of a dysfunctional family led by two people who are soulmates and yet find ways to tear each other apart year after year.

Now, I'm eager to read Lionheart, next in the Plantagenet series, about Richard I and the Third Crusade.

And you guessed it, this book qualifies for the Big Book Summer reading challenge.