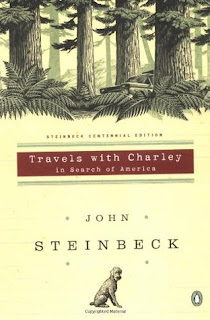 I read this John Steinbeck memoir of a cross-country trip slowly and savored not only the language but Steinbeck's perspective of America in 1960. Starting from his home in Sag Harbor, New York in September, Steinbeck and his elderly poodle Charley traveled in a camper, named Rocinante (after Don Quixote's horse), across the upper part of the continental U.S., down California, and then across the lower part of the country, and then up the eastern seaboard. 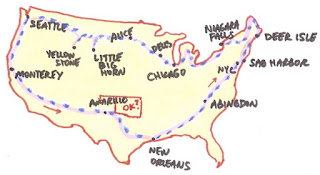 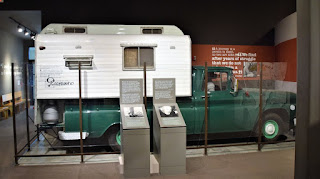 I love traveling, road trips, and Steinbeck, and so this book was a joy to read, not only in terms of seeing the country unfold along a ribbon of highway but also in how Steinbeck seeks to understand and talk with people he meets along the way. I loved how he and Charley struck up conversations so that they could listen to people's stories. The subtitle of the book is "In Search of America," and I think this is a noble ambition--to hit the road and try to understand what common threads constitute the warp and weft of the American experience.

Here are a few of my favorite quotes from the book:

For how can one know color in perpetual green, and what good is warmth without cold to give it sweetness?

I was born lost and take no pleasure in being found...


I think my favorite part was when Steinbeck stopped in a redwood forest and wrote of the magic hush that these magnificent, ancient trees impose upon us mortals. Also, I absolutely, positively have to visit Deer Isle, Maine!

The hardest part to read was the part in Louisiana, where Steinbeck witnessed the shameful ugliness of racial hatred during the time of forced integration of schools. This part was hard to read but I'm glad that Steinbeck included it. Today, almost 60 years after Steinbeck hit the road with Charley, we are still struggling to be inclusive and sweeping the past under the rug is never wise or good.

I'm counting this book as my classic from the Americas category in the Back to the Classics challenge.

Email ThisBlogThis!Share to TwitterShare to FacebookShare to Pinterest
Labels: Back to the Classics Challenge, John Steinbeck, Travels with Charley