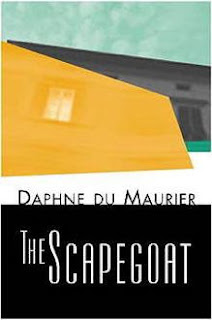 I stumbled upon a movie version of The Scapegoat by Daphne du Maurier a few years ago and was fascinated by the story. So, of course, I got a copy of the book, which I hadn't read when I watched the movie, and it sat on my shelf until the GoodReads True Book Talk group read it in March.

Once again, Dame Daphne didn't let me down. The Scapegoat was a classic DMM thriller. Basic story is that a boring British academician (John) whose specialty is French history meets his doppelganger, a roguish French count (Jean), in a bar and Jean tricks John into changing places with him. Very much a Prince and the Pauper story that Mark Twain played around with, and Dickens had a go at in A Tale of Two Cities.

In The Scapegoat, Jean has made an utter mess of his life, his family business is going under, his daughter is flighty and quasi-suicidal, his sister is a religious fanatic who hasn't spoken to him for 20 years, his mother is a morphine addict, his brother hates him...you get the picture. He tricks John into being his scapegoat - assuming his identity so he can disappear without causing a manhunt. John also feels he has made a mess of his life and is headed to a monastery to try to find a reason for living.


Incredibly, John is able to step into Jean's shoes--they are identical, and John's French is perfect. It was fun to read about how he managed to figure out all the various threads of Jean's life, and wonderful to see how he was able to mend the family and the business. John is definitely the hero of the story.

The book and the movie differed most in the ending, although the movie is set in England not France, and Jean became Johnny. The book turned out to be very positive and life-affirming. The movie version took a much darker tack. I ended up rewatching the movie after finishing the book and really wonder why the film makers choose to go dark instead of light with their version.

The Scapegoat was first published in 1957, making it one of DMM's later works. It was tightly written, really interesting, especially since WWII and the French occupation and resistance is still very fresh in people's lives, and well worth reading.

This novel is part of my Classics Club first 50--I'm closing in on getting this challenge done this year!
at Sunday, April 28, 2019