What a Coincidence! Thoughts on Dickens' Oliver Twist 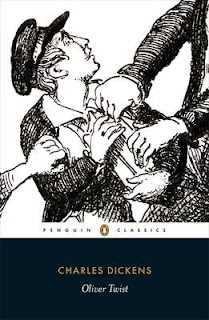 I just had the pleasure of rereading the first Dickens' novels I ever read, back when I was a young teenager, Oliver Twist, or The Parish Boy's Progress, by Charles Dickens.  First published serially in 1837-1839, Oliver Twist is a wonderful story, full of memorable characters and highly readable.

There's lots to talk about with regards to the novel, but what I'm thinking about mostly on just finishing it is the role of coincidence in the story.  In other words, could the plot work if Oliver didn't happen to run into all the right people who could engineer his rescue and restoration?

In Oliver's first venture outside of Fagin's lair with the Artful Dodger and Charley Bates, he is nabbed as one of the boys who attempts to pick Mr. Brownlow's pocket.  Mr. Brownlow believes that Oliver is an innocent and lets the boy live at his house where he notices a striking resemblance between Oliver and a portrait of his best friend's daughter, Agnes Fleming who disappeared after becoming pregnant by Brownlow's friend, Edwin Leeford.  Once Oliver disappears, Mr. Brownlow sets out to find out Monks, the wayward son of Leeford, who died estranged from Monks' mother.  If Mr. Brownlow hadn't noticed the resemblance, he never would have set out to find Monks.

After Oliver is snatched from Mr. Brownlow's care and returned to Fagin's lair (love that word!), he doesn't set foot outside again until he is sent to help nasty Bill Sikes break into a house in the country. The burglary goes wildly bad and Oliver ends up being taken in and cared for by the family whose home he was helping Sikes to break into.  It just so happens that the owner of the house is Mrs. Maylie, and her adopted daughter Rose is the orphaned sister of Oliver's mother.  Small world!  Rose bonds with Oliver, believes he is goodness itself, and is instrumental in convincing Nancy, Sikes' girlfriend, to save Oliver when Nancy overhears that Fagin and Monks want to kill him.

The coincidences really are eye-rolling but without them would the plot still work?

I think the answer is no.  Mr. Brownlow seeing a resemblance between Oliver and Agnes Fleming and setting out to find Monks didn't really advance the plot.  Monks was actively looking for Oliver in order to get rid of him completely.  However, once Oliver and Mr. Brownlow find each other again, only Mr. Brownlow could understand the interest Monks had in Oliver and could insist that Monks relinquish his fortune to Oliver.  All other parties who know of what happened were dead.  Somehow, Oliver had to encounter the one person left on the planet who knew what Monks had done.  The problem is that Oliver encountered him entirely by chance.

The second coincidence is less problematic.  It's lovely and sweet that Oliver and Rose found each other and loved each other before learning of their family relationship, but it wasn't that relationship that spurred the Maylies and their circle to work to protect Oliver.  I don't see how Rose and Oliver being related affected the main storyline other than to underscore the Victorian sentimentality.

One final note, though.  The subtitle of the book is The Parish Boy's Progress, which echoes and alludes to John Bunyan's The Pilgrim's Progress.  I have to wonder if whether it was grace, in the form of coincidence, that led Oliver into Mr. Brownlow's world and thereby put himself into a position in which he could be rescued by Mr. Brownlow.  I'm no theologian and I could be grasping at straws to make a favorite novel "work," but perhaps the use of coincidence reflects a belief in the guiding hand of providence.  Without the subtitle, I wouldn't have thought that the coincidences weren't more than a young novelist taking shortcuts, but now with the subtitle, I'm not so sure.

This counts as my 19th century classic in the Back to the Classics challenge.
at Tuesday, March 29, 2016

Email ThisBlogThis!Share to TwitterShare to FacebookShare to Pinterest
Labels: Back to the Classics Challenge, Charles Dickens, John Bunyan, Oliver Twist, The Pilgrim's Progress