Posted by JaneGS
Last week I visited the Bay Area, Monterey, and the Salinas Valley, which included a pilgrimage to John Steinbeck's home in Salinas, where we had lunch, and then an afternoon at the Steinbeck Center, just down the street.


John Steinbeck was born in the room to the left of the front porch (his parents' bedroom at the time) on February 27, 1902.  The room to the right of the front porch was the parlour and the room in which I had lunch, cooked and served by volunteers who work at, own, and run the Steinbeck House Restaurant.  When John was born, the upstairs was not yet finished, but by the time he was a teenager he and his sister had bedrooms upstairs.  Later, when he was married, he returned to the house to care for his ailing parents and wrote The Pastures of Heaven and The Red Pony in one of the upstairs bedrooms.

The house is on Central Avenue, and figures in his semi-autobiographical novel, East of Eden, as does downtown Salinas as a whole.

The Steinbeck Center is a couple of blocks away, on the corner of Central Avenue and Main Street, and it contains a wonderful interactive exhibit on the life and works of Steinbeck.  One of my favorite displays was this map of Salinas that traces the route that Kate takes when she walks around Salinas doing her errands. 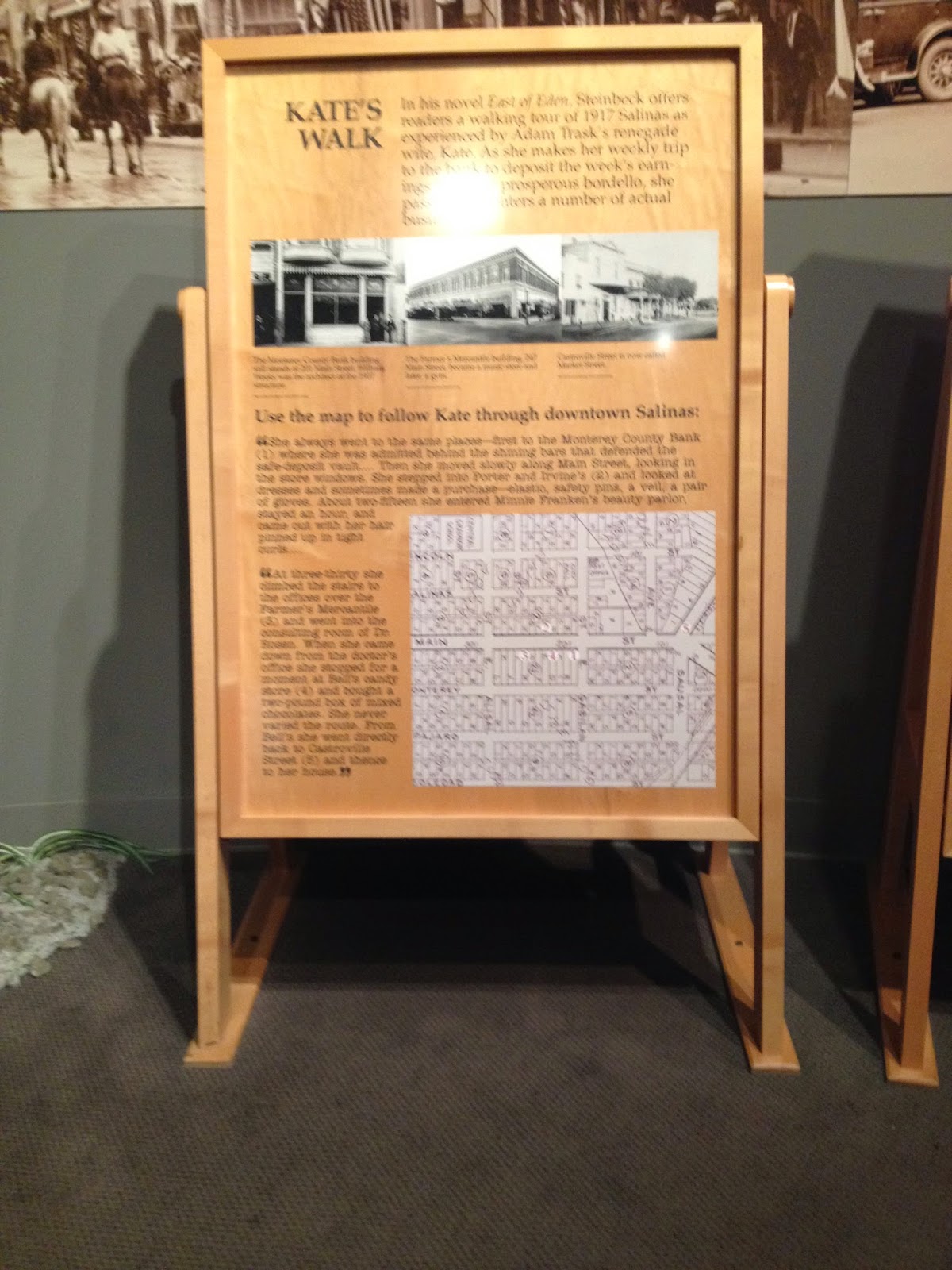 This isn't a great picture of the map but after touring the exhibit, we did a walking tour of the town, noting where the candy store was, and the bank, and the Farmers Mercantile Building, and the other places mentioned in the book.  Sadly, nothing remains of the row of whorehouses across the tracks on what used to be Castroville street. 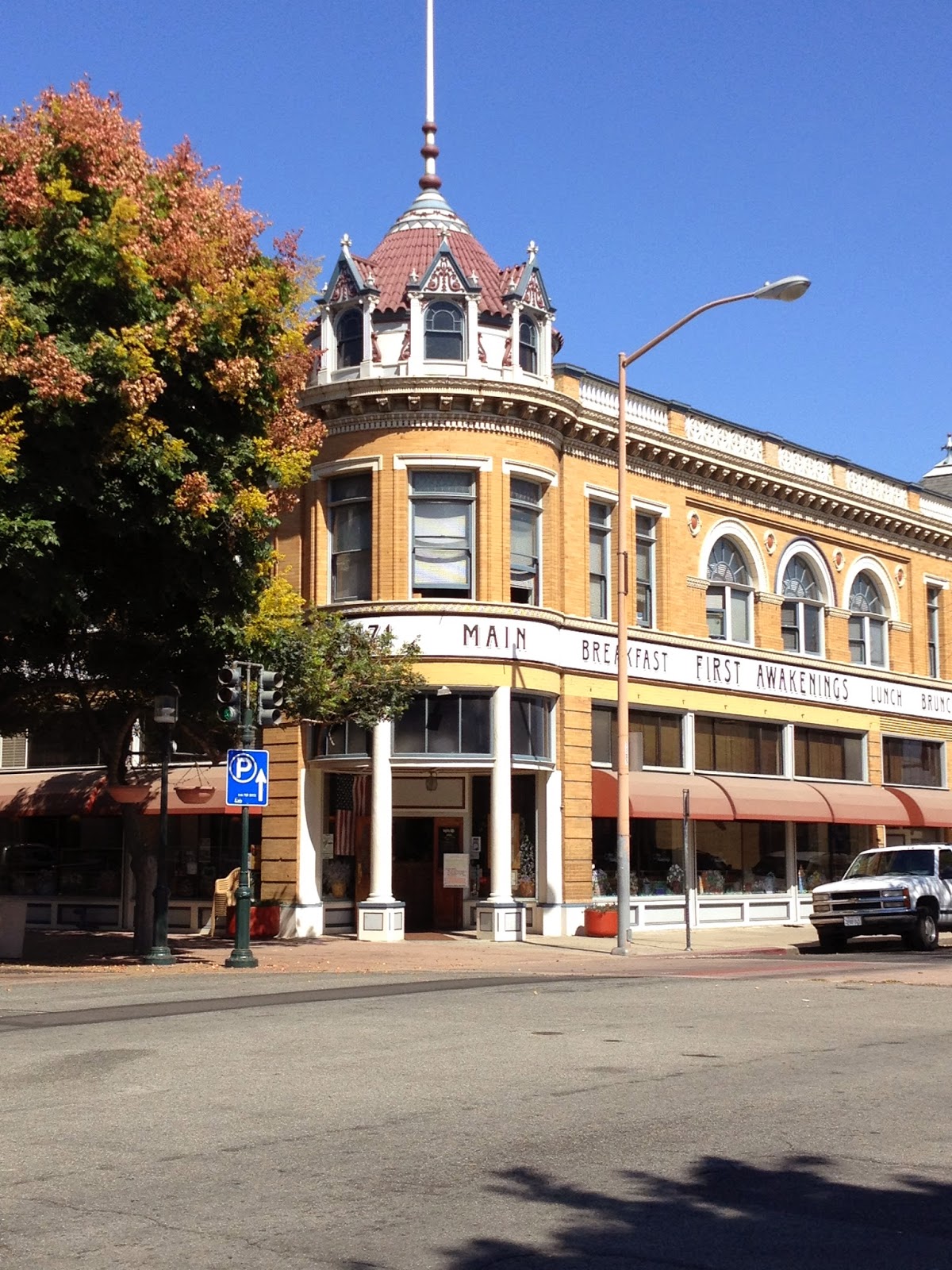 Historic downtown Salinas has a sleepy, nostalgic quality to it, and I had no trouble picturing the characters of East of Eden living and working in this town.  Swap the pickup trucks for Model Ts and you're almost there!

I also really enjoyed driving the length of the Salinas Valley and picking out the places from the various Steinbeck novels that I've read.  I picked up this terrific map at the restaurant gift shop to guide my way. 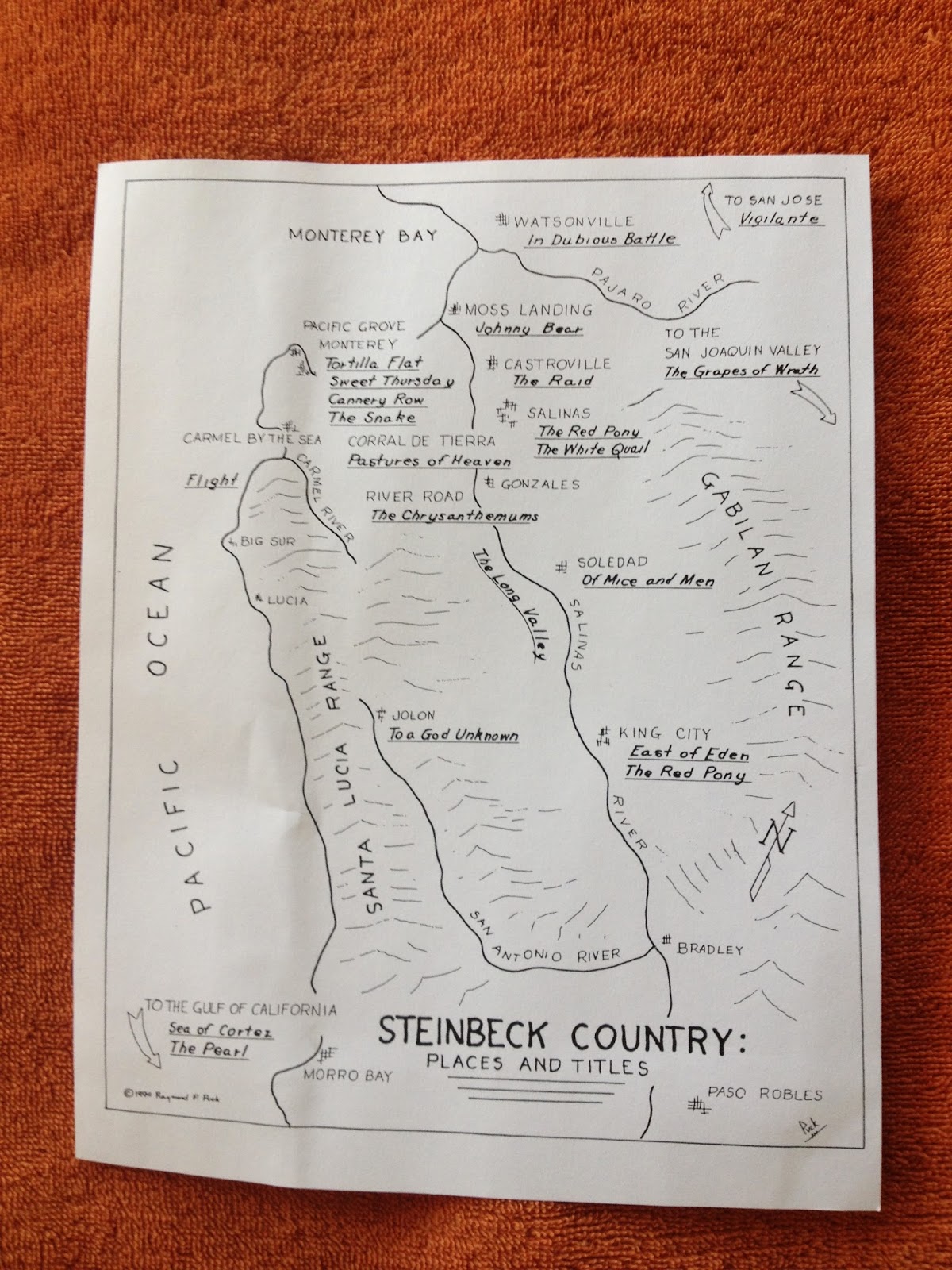 I love to make pilgrimages to favorite authors' stomping grounds.  I like to see the world they looked upon, breathe the air they breathed.  I think physical landscapes can shape mental landscapes and traveling in the Salinas Valley will only help me more fully experience Steinbeck's fiction.

Disclaimer: We also spent a fair amount of time in Monterey and Carmel, but despite the many statues and shops named for Steinbeck and his characters, modern-day Cannery Row is nothing like either the poem or stink that Steinbeck describes so elegantly in the opening lines of Cannery Row. Instead, it is a purely commercial, tourist haven--still fun to visit but it's not Steinbeck's Cannery Row.  Cannery Row and Sweet Thursday are among my favorite books of all time, but to visit the world Steinbeck describes in them, you can only read the books!