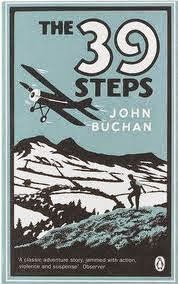 I picked John Buchan's spy thriller The 39 Steps for one of my four R.I.P. reading challenge books, but the choice was absolutely serendipitous when I realized that it also could double as my Back-to-the-Classics novel in the wartime setting category.

I enjoyed The 39 Steps--it was published in 1915 and takes place the year earlier, the summer of 1914, when Europe tottered on the brink of war.  The first-person narrator, Richard Hannay, is caught in a counter-espionage plot and ends up being chased all over Scotland by both Scotland Yard (he is falsely accused of murder) and the German spies, whose plot to steal military secrets he has to foil before it's too late.

It's a fun book to read with an engaging narrator/protagonist.  Richard Hannay is a Scot who has traveled the world, made his "packet" as a mining engineer in the colonies, thinks in slang, and doesn't shirk from doing his duty.  It has a wartime-propaganda feel to it, which is interesting historically.

Hannay careens through Scotland much in the manner of a pinball--hiding in the heather, disguising himself as a road worker, blowing up a cottage in which he is held captive, donning tweeds, stealing cars and smashing them, and deciphering a codebook.  Hannay has amazing luck--getting himself out of impossible situations through bravado, cunning, and being befriended by a host of quirky characters.  There are coincidences that defy belief, but I found myself being a most forgiving reader this time round.

I don't believe there's a single female character in the whole book ( a mere 149 pages), though it seems each of the four movie versions added one or more female characters, probably to broaden the audience.  There's also a TV series, Hannay, which ran two seasons.

Buchan apparently featured Hannay in four subsequent books, none of which I ever knew about but might read out of sheer curiosity.

I'll probably start with the latest movie, featuring Rupert Penry-Jones in the lead role, because it sounds like the most faithful to the book, though the first is a Hitchcock movie and though "based" on the book is supposed to be the best. 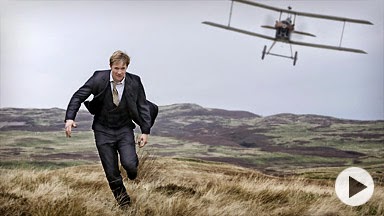